FinTech Futures has collated a list of some of the biggest mergers and acquisitions this quarter.

The size of the deal is roughly double the Californian fintech’s last private valuation of $2.65 billion from late 2018, when it raised $250 million in a Series C funding round. Early investors in the fintech included its acquirer Visa, as well as Visa’s rival Mastercard. Goldman Sachs – also the exclusive adviser on the new deal – was involved, alongside the venture arms of Citi and American Express. 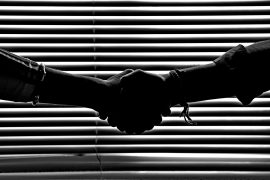 FinTech Futures has collated a list of some of the biggest deals this quarter.

2) LendingClub becomes first fintech to buy a US regulated bank

Documents issued by LendingClub say the deal will give it the ability to offer new products, diversify its earnings and reduce – or eventually eliminate – its reliance on funding rounds. Taking 12-15 months to go through, the acquisition is expected to break even for LendingClub two years after that.

Morgan Stanley announced its plans to buy E-Trade, the electronic platform used by financial traders, for $13 billion in February.

The biggest takeover by a major American lender since the 2008 global financial crisis, conversations prior to the eventual deal began as early as 2002 according to the bank’s CEO James Gorman. The bank will pay $58.74 a share in stock for E-Trade, gaining an additional 5.2 million customer accounts and a further $360 billion in assets.

SIX Group has been given authorisation from the National Securities Market Commission (CNMV) in Spain to offer a $2.8 billion all-cash takeover of Bolsas y Mercados Españoles (BME), operator of the Spanish stock exchanges.

The offer, which has a 43-day window for acceptance, is an all-cash voluntary tender for 100% of the share capital of BME. Valuing each BME share at €33.40, the deal implies a total equity value of €2.8 billion. The offer represents a 47.6% premium over the average trading price of BME shares.

Worldline, the financial services provider for transactional, cybersecurity and big data services, announced its acquisition of French peer and competitor Ingenico for $8.6 billion in February.

Majority-owned by Atos, Worldline says the acquisition will create the fourth biggest player in the global payments sector. Ingenico is a major point-of-sale (POS) terminal provider which controls 37% of the market globally. The cash and share deal gives Ingenico a valuation of €7.8 billion ($8.6 billion).

Raisin, the first pan-European savings marketplace, took its first step into the US deposits market with the acquisition of Choice Financial Solutions (FS) – a Spanish-American deposit software provider.

The acquisition of Choice FS, the fintech led by CEO Daniel Smith who was formerly JP Morgan’s chief of technology (CTO) for tech and new business, offers Raisin a foothold into partnerships with American banks.

Leading the deal is Macquarie’s infrastructure arm Macquarie Infrastructure & Real Assets (MIRA), which has signed an agreement to take control of AirTrunk according to people with knowledge of the matter – an official spokesperson is yet to comment on the deal.

It is paying $1.35 billion in cash and 39.5 million shares for CardWorks, in a bid to diversify its product offering

Intesa Sanpaolo, Italy’s second largest bank behind UniCredit, made a €4.9 billion ($5.3bn) bid for its local rival UBI Banca in what can only be interpreted as the start of its Italian bank consolidation play in an otherwise fragmented banking landscape.

UBI is Italy’s fifth largest bank and last registered its total assets in 2018 as $125.3 billion. Intesa says it will offer 17 new shares for every 10 UBI shares tendered. If Italy’s largest retail lender succeeds in its bid, it says it will create the seventh-largest bank in the eurozone focused on wealth management and insurance with $1.2 trillion in assets.

The deal, a mixture of cash and stock, will see US-based SoFi, a decade younger than its acquisition Galileo, diversify its consumer-led offering with business-to-business (B2B) components too. Galileo will operate as an independent division of SoFi.