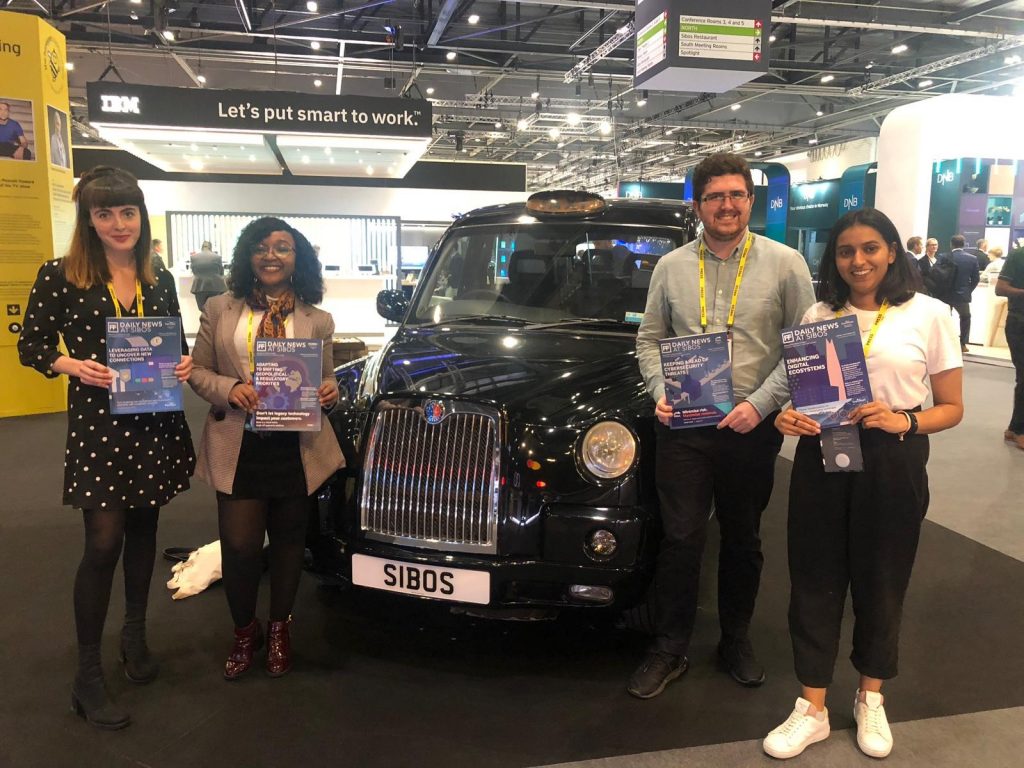 This year FinTech Futures brought you the Daily News at Sibos, in print and online, as well as exclusive interviews with industry leaders and summaries of keynote talks.

Now it’s all over, we thought we’d pull all this content together into one final wrap-up of the London-hosted four day event.

Regulation is not enough to bring transparency and trust to the cloud, “we need more practical solutions,” says Credit Bank of Moscow’s deputy board chairman, Sergey Putyatinsky at Sibos.

The second Payment Services Directive (PSD2) has changed the way that banks think about technology, and brought the discussion about application programming interfaces (APIs) from its original place in the IT department to the forefront of the industry’s mind, according to a panel at Sibos.

Swift has revealed its latest European payments pilot at Sibos which took 41 seconds to travel from Singapore to Germany, following FinTech Future‘s exclusive preview on the announcement.

When do digital ecosystems stop performing?

There are both opportunities and setbacks when it comes to creating a truly digital ecosystem, but vendors should be “aware of the challenges on the supply chain” argues Colin Parry, CEO of Issa, at Sibos.

“You ain’t seen nothing yet,” says UBS’s strategic development lab head Christopher Purves, who talks about the rise of interconnection between systems in foreign exchange (FX) and how this will cause flash crashes like we’ve never seen before.

Banks are misjudging competitive risk in the payments market, and are facing an existential threat if they don’t match up to fintechs willing to lose money to snatch up customer relationships and deal with payments friction, says Alan Trefler, CEO of Pega Systems, speaking at Sibos.

This issue explores how financial organisations are keeping ahead of cybersecurity threats as new technology ushers in new risks which need to be tackled. Panaseer’s VP Becky Keightley talks about the evolution of financial crime for banks, while senior associate at Cooke, Young & Keidan Michael Cumming-Bruce talks about the opportunities for fraud with Libra.

London could be “centre of the world” for RMB

London has the potential to be the centre of the world for Chinese RMB, according to Charles Li, CEO of Hong Kong Stock Exchange and Clearing (HKEX), should his firm’s proposed £32 billion merger with the London Stock Exchange Group (LSE) go ahead.

Visa is trying to avoid “immediate displacement” of cash in its digitisation process so as not to disrupt the US population which is still heavily cash-based, says SVP global head of Visa Business, Kevin Phalen, at a Sibos round table.

“Digital transformation will happen quicker in LatAm than Europe”

The implementation of instant payment schemes like EBA Clearing’s RT1 and new Request to Pay (R2P) initiatives will help banks compete with global technology firms and fintechs, according to a Sibos panel.

MUFG “ready to work with fintechs”

Japan-based Mitsubishi UFJ Financial Group (MUFG) is “ready to work with fintechs”, revealing it already has its eyes on some and wants to open up the conversation as much as possible, says its EMEA head of cash and liquidity management Alan Verschoyle-King in an exclusive interview with FinTech Futures.

Banks must improve data handling to root out financial crime

Banks need to improve the handling of their data before they attempt to apply artificial intelligence (AI) or machine learning systems to root out money laundering and financial crime, according to a panel at Sibos.

For this penultimate edition, the theme is adapting to shifting geopolitical and regulatory priorities. Global head of transactional services at AbsaThabo Makoko explores how countries in the south of the African equator can improve their payments infrastructure, while managing director and head of global transaction banking at Lloyds Bank Commercial Banking Ed Thurman analyses how global trading tensions are prompting more corporates to diversify the markets they trade in.

“Blockchain is not a magic wand,” says Euroclear

Belgium-based financial services company Euroclear says “blockchain is not a magic wand” on a panel discussion at Sibos about the vulnerabilities of blockchain.

With faster payments redefining transactions, consumers now expect greater transparency and banks should focus on the “implications of data” to stay innovative, says Marion King, director of payments at NatWest.

“It’s critical not to let the bad guys win [the cybersecurity race] by letting them take advantage of our fragmented regulatory landscape,” says Norton Rose Fulbright’s head of technology and innovation Stella Cramer at Sibos.

Aleksandra Mojsilovic from IBM Research discusses why using AI and machine learning to tackle societal challenges should be on every business’ mind.

Leveraging data to uncover new connections is the theme of this year’s final edition. CTO & COO Moshe Selfin and VP of CTO Office Ilya Dubinsky at Credorax discuss the future of 5G and its easily accessible data, while EMEA head of State Street Global Exchange Riccardo Lamanna explores how financial services has undertaken AI, data ledger technology, robotics and cloud technologies – questioning whether some of this technology is a fad, or whether it will become essential.

“We don’t get rid of anything in this industry”, says Fiserv director

“We don’t get rid of anything in this industry,” says Fiserv director of product Trevor LeFleche on the evolution of payments and the current uses of cash, card and digital channels at Sibos London in an exclusive interview with FinTech Futures.