Sibos 2019: London could be “centre of the world” for RMB

London has the potential to be the centre of the world for Chinese RMB, according to Charles Li, CEO of Hong Kong Stock Exchange and Clearing (HKEX), should his firm’s proposed £32 billion merger with the London Stock Exchange Group (LSE) go ahead.

Speaking at the second day of Sibos 2019 in London, Li says that he believes a successful deal would “unlock the last frontier” of capital markets and create a network that would stretch across the globe. 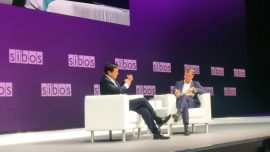 HKEX submitted its surprise £32 billion bid for the LSE in September. The latter rejected the bid, stating that it did not believe that HKEX would give London the best platform for China. LSE has since gravitated towards a partnership with the Shanghai Stock Exchange.

“We need to have a market infrastructure globally that can underpin the two centres of gravity that are East and West,” says Li. “It’s a very simple vision but a very big dream. We want to create an unrivalled exchange across time zones, across currencies.”

A merger between the two groups would create the world’s third-largest exchange, after the US-owned Intercontinental Exchange (ICE) and the Chicago Mercantile Exchange (CME) Group.

Li says that HKEX has wanted to do the deal for “quite a while”, but realises that it also submitted the proposal a little late. He adds that the group wanted to wait until Brexit uncertainties were removed before making a formal approach, but as the outcome became less clear “we decided it was now or never”.

LSE CEO, David Schwimmer, who spoke prior to Li on the conference programme, reiterated the UK stock exchange’s focus on Shanghai. “We have invested for years in our relationship directly with Shanghai Stock Connect, which has been in the works since 2015. We value that partnership and believe its mutually beneficial.”

“We’ve been around for 300 years, we don’t take a short-term perspective on what might be a quick way to get access to something that might not have a strong competitive position.” Schwimmer adds that LSE sees Shanghai as the long-term financial centre of China.

HKEX Li says that his company knew it might take on risk, and loss of face with a rejection. “If I were sitting in David’s chair I would reject it too[…] but we think the opportunity is great and the UK market deserves a look at it.”

LSE is no stranger to mergers and acquisitions. In 2017, EU regulators blocked a £21 billion merger between the LSE and Germany’s Deutsche Boerse. The European Commission said at the time of the deal would have created a “de facto monopoly”.

In 2011 the group attempted to merge with Canadian exchange TMX in a deal worth £2.4 billion, but negotiations were eventually scrapped in the summer of that year after it could not gain majority approval from TMX shareholders.

Li says that mergers of this type have failed in the past is that the opportunities for growth were not there and had hit their ceilings. “It was just people saying, ‘together we can cover a lot of people and fire a lot of other people and restructure, do cost synergies.’ All this was driven by cost synergies, which is really just firing people.”