Sibos 2019: “Blockchain is not a magic wand,” says Euroclear

Belgium-based financial services company Euroclear says “blockchain is not a magic wand” on a panel discussion at Sibos in London about the vulnerabilities of blockchain.

Euroclear’s CISO, Vincent Laurens, is of the strong belief, in line with the rest of the panel, that blockchain is not a ‘one size fits all’ solution. 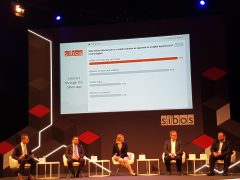 Nordea Bank: “Permissionless is problematic for banks, because we need to know what we’re dealing with”

Debating the differences between permissioned and permissionless blockchains, it was clear banks are still skeptical as to what they can do, if anything, with permissionless-based solutions.

“Permissionless is problematic for banks, because we need to know what we’re dealing with and who has access,” says Nordea Bank’s head of emerging technologies Ville Sointu. “We’re trying to understand as a bank whether there’s a reason to use permissionless networks in a secure way at all.”

The issue of cybersecurity seemed to be a sticking point for the panel as the industry is still working on it for blockchain.

In the meantime, Greater-Piekarska points out that “if you don’t feel comfortable with your data being shown on the blockchain, then don’t put it on there.” For her, this level of visibility has to be a given on blockchain technology, otherwise it defeats the point of what the software stands for.

The inherent contradiction between the need for the visibility of data on the blockchain, and the need from banks to have a secure, closed system, makes permissionless blockchains somewhat of a conundrum for established financial institutions.

Sointu concludes that “we need a constitution for these networks, as this will help manage the risk”. The theory being, if all institutions can refer to a written law, then accountability is far more transparent when data breeches occur.