“You ain’t seen nothing yet,” says UBS’s strategic development lab head Christopher Purves, who talks about the rise of interconnection between systems in foreign exchange (FX) and how this will cause flash crashes like we’ve never seen before.

On a Sibos panel discussing the challenges of FX liquidity, Purves says he’s of the strong belief flash events “hurt most people” and going forward, as systems begin to work together and offer more transparency, we’ll see even more of them. 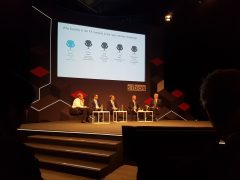 In less liquidated markets this regulatory push to more transparency in FX will mean that liquidity could be damaged, but the panel also noted the contrary issue, that less transparency means less clarity on what operators cover and a lack of understanding down the chain of what the real price impact is.

Fellow panelist and head of spot and eFX Trading, Dmitry Ilyaev, sees the broader impact of these flash crashes. He says: “As we see patterns, markets can self-regulate. If there are inefficiencies, firms will come in to the market to monetise them and eventually smooth them out.”

The panel also discussed wider issues surrounding FX. Purves talks about the imminent arrival of tokenised cash and how in the next 12 months the industry will see “a new system where money is transferred instantly”.

He advises firms in the FX industry: “If you haven’t got a token store, I’d start working on that.”

As for swaps, when the panel was asked why the FX market is seeing a growth in them, no-one could give a definitive answer.

Penney speculated that it might have something to do with the fact you can hold positions with swaps and keep them rolling, which lends itself to waiting out geopolitical risks like Brexit.

Towards the end of the discussion panelists talked about the future of artificial intelligence (AI) in FX. Purves says UBS has managed to create an explainable version of the market forest algorithm which they are now looking at not only for FX trading, but also for the medical space.