Banks are misjudging competitive risk in the payments market, and are facing an existential threat if they don’t match up to fintechs willing to lose money to snatch up customer relationships and deal with payments friction, says Alan Trefler, CEO of Pega Systems, speaking at a panel on the first day of Sibos 2019 in London.

“There was a belief that originally the fintechs and the disruptors would not be terribly successful, now we’re starting to see evidence that they’re going to be successful.” He adds: “But it’s the fundamental structure of the way the bank’s wholesale side of the market, but also consumer side, that is leaving them vulnerable to be picked off silo by silo.” 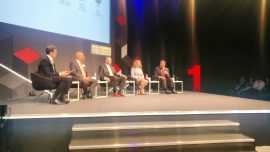 “It’s much easier for the fintech to attack a silo than attack a relationship. You’re competing against organisations that are perfectly happy to lose money for the next five years. This is much more of an existential threat than people realise.”

For Wells Fargo’s senior vice president for global payment services, Joanne Strobel, friction in payments increases costs for banks, and for underlying clients. “It increases our risk, and that’s never a good thing. It decreases our efficiency and has an adverse impact on our client relationships. These are all very big problems. Clients will vote with their feet. If they don’t like the service that we’re providing they’ll find another way to get their payments done right.”

Trefler believes that there are serious root causes when it comes to payment friction. “If we look at this through the lens of the banking customer, they are watching and their demands are changing. People expect transparency. But I think a big issue, perhaps the biggest issue is the siloed nature of the way banks are organised.”

“Channels think of themselves as being their own vehicles to talk to clients, and the back-office engines seem to sort of disassociate themselves from the reason that people are making these payments,” adds Trefler.

Anurag Bajaj, head of transaction banking at Standard Chartered, adds: “From a regulatory perspective the world has changed and has become more open to interpretation. This plays with various risk appetites that the banks have, and which is why you get this more varied experience.

“So, if I’m a regulator and I’m seeing this problem, and obviously the regulators are, promoting real-time payments and real-time settlements, I would look at why these payments are actually being stopped and investigated.”

“We do need to change our model,” admits Strobel. “To remain competitive we need to change the way we look at things holistically. There’s a lot of people holding on to their business model and their way of making revenue and they’re not willing to give it up. But what I always say is, if you don’t give it up, it will be given up for you.”