Sibos 2019: “Digital transformation will happen quicker in LatAm than Europe”

Trascasa predicts “the spike” will hit soon, and whilst it will be good for the Latin American population, it won’t be such good news for banks trying to make healthy margins on their products. 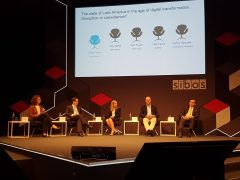 McKinsey: Technology “goes ahead of human beings, it’s not a blocker”

Technology “goes ahead of human beings, it’s not a blocker,” says Trascasa in response to fellow panelist, BNY Mellon’s digital officer Anthony Brady, who conversely believes technology can “bedazzle us” like a shiny hammer making everything else look like a nail.

One of Brady’s main messages for South America was that technology should always come second, after the problem you’re solving for the customer.

For fintech Adhara’s CEO Julio Faura Enriquez, blockchain offers a massive opportunity for change in Latin America. Enriquez says banks in the region are “quite interested” in the topic of cryptocurrencies now and are “a lot more advanced than they were a year ago”.

He puts the popularity of blockchain in certain parts of South America down to geography. Whilst Mexico is “the most mature for regtech”, national banks are not as interested in blockchain because they have no need for it. Whereas in Argentina, “a much more difficult financial landscape”, firms are very interested in cryptocurrency as an alternative to their current financial system.

This is a friction running throughout different parts of Latin America – whilst fintechs should, in theory, be a tool to aid banks in return for regulatory aid, the region is host to populations massively dissatisfied with government and central banks, urging fintechs to take a rip and replace approach rather than one of collaboration.

Enriquez believes blockchain will be able to offer visibility on, and hence life, liquidity, paving the way for real-time payments, hedging and mobile banking for the 70% of Latin America’s population who have mobile phones.

To do this, Enriquez says the region needs connectivity. “That means getting everyone in the same place and that needs governance,” says Enriquez, “both on a regional and international level”.

This means Latin American banks will need to overcome “regulatory caution” and stop turning to solutions internally, says Brady. Especially when the region has seen a 61% increase in fintechs founded between 2017 and 2018.