North Loop, a US challenger bank designed specifically for international students, has partnered with Australia-based start-up Cohort Go, an edtech helping prospective students set up living arrangements for study abroad. The partnership will allow the neobank’s users to send funds from more than 100 countries to the US fee-free. 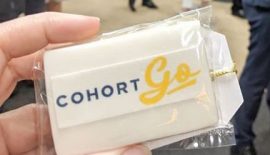 The neobank was created by former international student Tahem Veer Verma, who is also the co-founder of edtech Kings Learning, an app which provides employability-focused English Language training. North Loop users do not need a US social security number to set up an account, which means they can set it up before they fly over and pick up their card on arrival.

“You’re constantly reminded that you’re not a priority,” Verma told Pie News last year after the bank launched, explaining that international students sometimes have to travel to other cities sometimes just to reach a national bank where they can set up a current account.

Both companies say they “are aligned in their commitment to reducing barriers in international money transfers for the international education sector”.

North Loop offers students an ‘all in one’ money management app which includes free credit score checks and savings advice on bills and subscriptions. The challenger’s international payments transfer service already allowed students to send money fee-free from the UK, Canada, and Australian to the US, but with Cohort Go the neobank can extend this list to one 33 times the size.

“Studying overseas can be expensive and complex, so we’re delighted that this partnership with North Loop will make the financial side easier for students travelling to the US from particular source countries,” says Cohort Go’s co-founder and CEO Mark Fletcher, who says students can expect “low foreign exchange rates” along with their fee-free accounts.

The US challenger’s founder Verma re-iterated the low cost benefit of the partnership, saying its new Australian partner was “the most affordable option for students to send money overseas”. “Cohort Go’s prices are simply unbeatable, we haven’t found a cheaper way to send money than their platform,” he says.

Verma anticipates that North Loop will have 500,000 users on its platform by its third year – the end of 2021 – some of whom will be graduated by then.