SoftBank to invest further $1bn in LatAm fintech, ecommerce and health care in 2020

SoftBank is set to inject a further $1 billion into Latin America this year, adding to its $1.6 billion commitment from 2019.

With a focus on ecommerce, health care – presumably including the increasingly popular ‘healthtech’ – and fintech companies, the capital is part of the investor’s efforts to support around 650 firms across LatAm with a total Vision Fund of $5 billion for the region.

So far the Japanese conglomerate has poured between $100 and $150 million into 17 companies and two venture capital (VC) firms, including a $125 million investment into Mexico’s small and medium enterprise (SME) lender AlphaCredit last month.

SoftBank’s LatAm fund kicked off in March last year, and saw one of its biggest investments a month later to Columbia-based delivery start-up Rappi, which received $1 billion leading to a re-evaluation of $3.5 billion.

The investor also splashed its cash for Mexican lendtech for micro businesses Konfio last December, and Argentine money manager Ualá last November. According to Bloomberg, 50% of the LatAm Vision Fund sits in start-ups based out of Brazil: 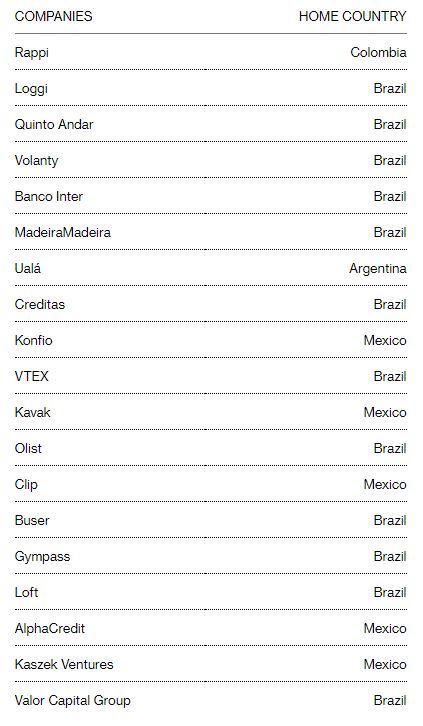 “We are focused on investing in companies that could achieve long-term profitability,” SoftBank’s head of Southern Cone Andres Freire revealed in Buenos Aires, first reported on by Bloomberg. In the past, SoftBank has invested in fast-growing companies such as Uber and WeWork, which later led to big losses for the investor, enraging its shareholders.

In the last quarter of 2019, it took a $6.5 billion loss on its investments in Uber and WeWork. But now, in a bid to placate its shareholders, SoftBank is keeping its eyes peeled for start-ups under the radar which have steady growth and profit projections, particularly in the LatAm region.

As well as fintech, ecommerce and health care sectors, the investor giant is looking at companies applying artificial intelligence (AI), as well as ones related to food – particularly ones focused on plant-based food.

Freire says SoftBank is currently “paying special attention” to two companies from Brazil, one from Peru and one from Chile. The investor will also roll out an 11-week programme with data science and engineering talent finder Correlation One. The programme will aim to train and, eventually, hire future AI experts.

There is still some work to be done, however, to LatAm’s infrastructure. Investor Sean Lippel at FinTech Collective, which backs Colombian fintech Minka, told FinTech Futures last month: “Before a fintech revolution can happen, there must be infrastructure. It’s very tough to get into the deeper problems without the infrastructure, peer-to-peer (P2P) is a real problem in Colombia without paying astronomical amounts.”

Minka is “a small start-up doing the work of big players” according to its CEO Domagoj Rozic, who says 90% of payments in Colombia are still being done in cash because of the lack of a good, affordable payments infrastructure.

But despite this need for basic infrastructure before fintech can really boom across the region, experts believe LatAm will seen a “leap frog” in its progress compared to that of its neighboring continent Europe over the same period. McKinsey’s senior partner Carlos Trascasa predicted at Sibos last September that “the spike” in digital transformation will soon hit LatAm at an unprecedented rate.