After announcing the release of five digital bank licences last year, the Monetary Authority of Singapore (MAS) has now seen as many as 21 bidders, Reuters reports.

At the end of August 2019, the MAS revealed that two digital full bank licences and three digital wholesale bank licences would be issued in a bid to stir up fintech competition in the region.

Since then, the country has seen a race between some of the world’s largest technology companies declaring their interest in securing a licence.

The latest announcement came from iFast, a wealth management fintech which is a partner of China’s Yillion Group – a firm that operates one of China’s four digital banks – and Hande Group – China’s first digital bank that is also backed by the world’s largest gaming company Tencent.

The wealthtech’s CEO Lim Chung Chun says in the filing that it wants to address some of the current inefficiencies for members, as well as assist those underserved by Singapore’s present banking industry.

Submitting its application at the end of December, iFast is hot on the heels of fellow major companies Razer Fintech, the fintech arm of Min-Liang Tan’s gaming hardware provider Razer, Grab Holdings, Singapore’s ridesharing equivalent of Uber, and Singapore Telecommunications (Singtel), one of the four major telcos operating in Singapore, who all revealed news of their applications last week.

Grab and Singtel have made a joint bid which would see a financial subsidiary created focused on digital-first customers and small to medium enterprises (SMEs) with limited access to credit. 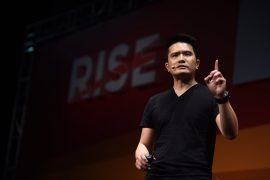 In November 2019, it was revealed that Alibaba Group’s affiliate Ant Financial was in the process of applying for a licence. That same month Asian massage chair tycoon Ron Sim revealed he was targeting a Singapore banking licence through V3 Group – the owner of his luxury brand OSIM.

The group said in a statement last week that it wants to focus on the needs of SMEs.

According to Reuters sources, roughly 50 companies are involved in the bidding – ten times the amount of licences.

Only seven of the bidders are vying for retail bank licences, whilst the remaining 14 are for wholesale banks. The reason for teaming up seems to be because of the stricter regulations in Singapore, which for example require retail bank licence holders to hold $1.1 billion in paid-up capital.

The MAS said it has seen huge diversity in applications, from e-commerce firms, to technology and telecommunications companies, as well as fintechs – particularly paytechs – and financial institutions.