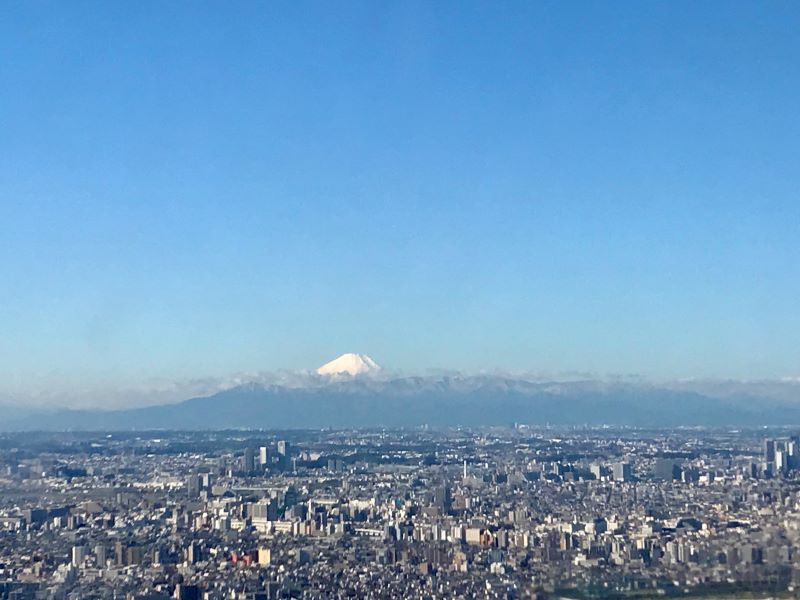 Traditionally quite reclusive, Japan is now ready and willing to open its doors to international fintech and is keen to turn its capital Tokyo into the number one financial hub in Asia and a truly global fintech hub.

“We want to make Tokyo the place where talent, funds, information and technology gather from all over the world,” Governor Yuriko Koike told reporters during a media trip sponsored by the Tokyo Metropolitan Government (TMG) in Japan.

Koike – the first female governor of Tokyo – is the driving force behind this transformation. She was elected governor in July 2016. The following year, TMG announced the launch of the Global Financial City Tokyo initiative – “a bold vision” as Koike describes it. Bringing together the central government and the private sector in a collaborative venture, this initiative aims to build a solid foundation for the asset management and fintech sectors to attract foreign companies.

Incentives include a one-stop support service, free consultation, and subsidies on average of JPY 3 million ($27,000) to help foreign companies set up their business in Tokyo. The support service is run by Accenture and is in English.

The results have been modest so far – 20 firms used the service in 2017/2018, of which six received the aforementioned financial subsidy. In 2020, 50 new companies from abroad are expected to have utilised these services and launched in the city. Of these, half are anticipated to be in the asset management space, and half in fintech.

In 2016, Tokyo got its own fintech incubator and start-up hub, Finolab, which has recently launched a sandbox with Tokyo Stock Exchange. It also plans to create its own venture fund to provide seed money support to early stage fintech firms (similar to Plug and Play in Silicon Valley in the US). Among its advisors are well-known industry figures such as Chris Skinner, Brett King, Ghela Boskovich and Jim Marous.

In April 2019, TMG unveiled another venture – FinCity Tokyo. Its role is to promote Tokyo to potential foreign investors, facilitate entry into Japan for international fintechs and asset management firms, and make policy recommendations to the central government.

TMG has been learning from the established global financial services hubs, Koike noted. For its FinCity venture, for instance, it drew inspiration from the City of London. 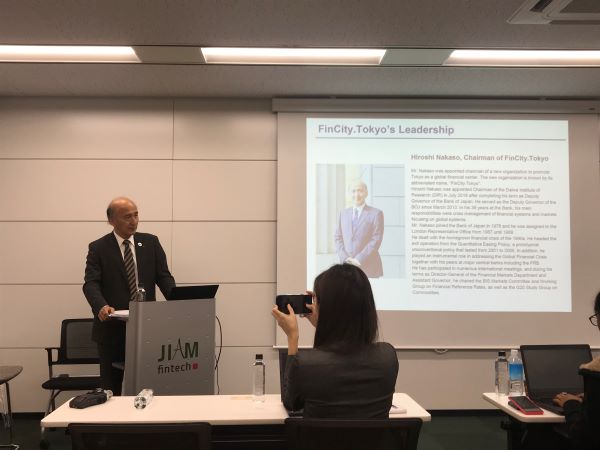 In its turn, FinCity has been building ties with Paris Europlace, a French organisation in charge of promoting and developing the Paris financial marketplace. The two organisations recently signed a memorandum of understanding. In addition to historical connections between the two nations, there are a lot of similarities between them today, explained Hiroshi Nakaso, chairman of FinCity (he is also chairman of the Daiwa Institute of Research and former deputy governor of Bank of Japan). These include similar labour law and the tax regime, a somewhat antiquated pension system (which both countries are now trying to address), high levels of bureaucracy and silos, and English not being their first language.

But this is not the first time Japan has made noises about making its mark on the global finance scene. What’s different this time?

There is more collaboration and unity between all the stakeholders, Koike explained. The central and municipal governments, Financial Services Agency (FSA – Japan’s financial regulatory authority), and the private sector have really pulled together to deliver concerted, coordinated efforts to achieve this goal.

The incentives and support have also been helpful, she noted. “We aim to ease the administrative procedures, such as acquiring relevant licences, tax and accounting. We want to help with business matching and talent acquisition. We want to create easier living environment for expats. And we are keen to help those from abroad to understand Japanese customs.”

Another lead this time round is the advancement of technology, which has opened up so many new opportunities, Koike said.

As for Tokyo’s differentiation from its APAC neighbours Singapore and Hong Kong, “we are a free, democratic country”, she stated, “and we are a stable country”.

“All this gives good reasons for optimism,” she concluded, “to fulfil our vision for Tokyo to be a global city full of vitality and outstanding financial services.”

FinCity’s Nakaso agreed, citing favourable macroeconomic conditions (taking advantage of the tailwinds of Brexit in Europe and the Hong Kong vs mainland China clash) as well as the strength of Japanese economy (e.g. the base salaries have been growing five years in a row since 2014).

“The Japanese economy hasn’t been better,” he emphasised. However, there is the need for long-term diversification of Japan’s underutilised household assets, which total JPY 1,800 trillion ($16.4 trillion). Over half are kept in bank deposits, and Japan is looking for foreign players to help unlock and utilise these financial assets. At present, only 17% of the country’s household assets are invested in stocks and mutual funds, whereas in the US the number is 43%.

“We are not building castles in the air, we really can be a global financial hub,” Nakaso stated.

A lot of work has already been going on behind the scenes, he noted, such building “highly reliable” payment and settlement systems. “It is often invisible in the background but is foundational,” he stated. “We are creating cutting-edge infrastructure.”

Bank of Japan’s settlement system, for instance, has potential to run 24 hours to overlap with the markets in other geographies (it currently runs until 9pm).

Also, in 2018, Bank of Japan and the Hong Kong Monetary Authority (HKMA) developed a payment link, enabling real-time settlement between Japanese government bonds and Hong Kong dollars. It is understood to be the first attempt of this kind to connect two financial systems by any central bank.

Nakaso also noted that a lot of innovation originated in Japan (even though it was spread around the world by others), such as NFC and QR code. 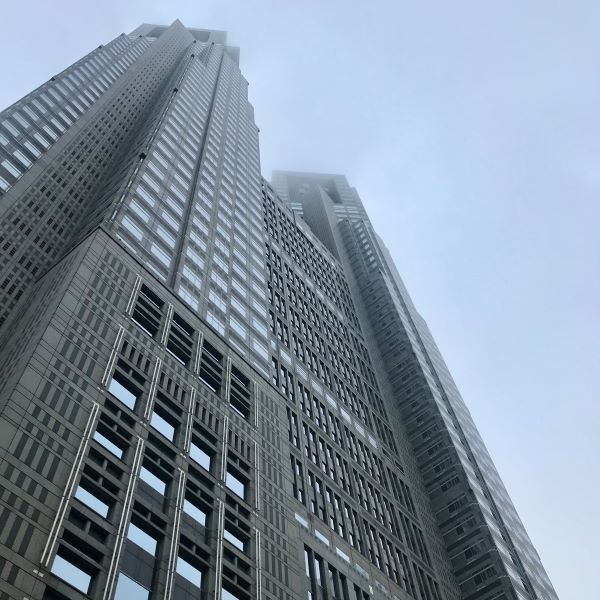 Fintech is in early stage of development in Tokyo, admitted Yoshinao Ogawa, TMG senior director for strategic projects, but was keen to emphasise this was not in quality but in scale, compared to the established hubs such as London and New York.

This creates great opportunities, in his view, for those who are ready to embrace Japan. “It is a growing market, so there is enough market share for everyone,” he said. “It’s important to nurture a competitive environment.”

There is no specific fintech niches that TMG is focused on, so all are welcome, including digital, paytech, insurtech, blockchain, robo-advisory, data management, compliance / know your customer (KYC), and cybersecurity.

FinCity’s Nakaso said domestic mid-tier banks are encouraged to work with foreign fintechs to unlock new opportunities. This is done via education and legislation (such as the introduction of APIs), he said. “Japan’s banking tech is lagging behind,” he noted. “This needs to be addressed quickly and this is where fintechs can really help.”

Among early entrants are European fintech unicorn Revolut, which is in the process of setting up shop in the country and whose waitlist for Japan is now open. Revolut said it obtained the authorisation from FSA in autumn 2018, and agreed deals with Rakuten, Sompo Japan Insurance (SJNK) and Toppan. At launch it will focus on the e-wallet, payment card and insurance products.

Moneythor, a Singapore-based provider of data-driven digital experiences for banks and fintech firms, opened an office in Tokyo in summer 2019. “The Japanese market is going through a major stage of disruption and its renewed focus on digital banking makes it a very exciting market for us,” commented Olivier Berthier, Moneythor’s co-founder and CEO. The start-up is also a member of Tokyo’s new fintech incubator, Finolab.

A real success story is PayPay, a joint venture between India’s mobile payments firm Paytm, SoftBank and Yahoo Japan, formed in the autumn 2018. By the end of 2019, the PayPay mobile payments app had ten million customers, supported by one million merchant partners and local stores, and surpassed 100 million transactions.

Cash dominates daily transactions in Japan (similar to India) and PayPay’s stated aim is “to create a society where people can buy anything through cashless payments in every corner of the country with a safe and secured service for our users”. 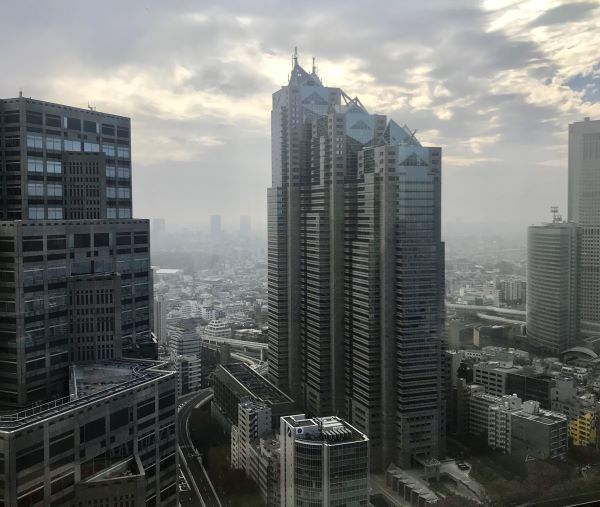