Dubbed the largest funding round ever for a French fintech by Qonto’s head of compliance Jean-Eloi Rateau, it follows just a few days after Tencent’s investment in fellow French mobile payments start-up Lydia. 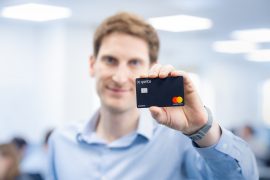 Founded in 2016 and securing its payment institution licence by June 2018, Qonto has grown exponentially.

Last year, the fintech – which built its own core banking infrastructure – managed €10 billion in transaction volume, and now around 50% of its business customers also use its self-built core banking platform on their back end.

Qonto is also planning to obtain a credit institution licence according to TechCrunch, which would open up even more revenue streams for the challenger.

Now with an armory of 65,000 business customers, the challenger is currently live across France, Italy, Spain and Germany – where it launched just two weeks ago. With its new funding, Qonto is looking to further firm up its position in these markets, develop new features based on local user needs and hire 100 by the end of this year.

This funding round is the challenger’s biggest by far, having now closed a total $150.0 million (€136 million) from investors. “Qonto is reinventing business banking, addressing an under served SME and freelancer market,” says new backer Tencent.