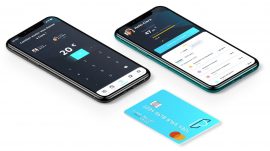 Pixpay costs €2.99 per month per card

The 2019-founded fintech says it’s the first to focus on 10-18-year-olds, but other competitors are tapping the teen-banking space. Fellow French-based Kard, Spanish-based Mitto, US-based companies Greenlight and Step, and UK’s gohenry and Osper, are also serving the teen to young adult population.

Other competitors which don’t focus on youth accounts but still offer them as a service include mobile payment app Lydia which offers accounts to 14-year-olds with parental permission, and Starling Bank, which now offers current accounts for 16-17-year-olds.

Pixpay costs €2.99 per month per card, allowing young users to start projects and earmark funds for particular purchases whilst parents keep tabs on their spending through their own version of the app.

Once signed up, users receive a Mastercard, get to customise their PIN code and receive transaction notifications. The card allows ATM withdrawal limits, and whilst Eurozone ATMs won’t incur any charges, other ATM withdrawals will cost €2.

One more unique feature is the ability for parents to define an interest rate on a vault account. The functionality is intended to teach children how to save money.

The start-up is looking to develop the product so children can eventually get paid for jobs and chores around the house, and be managed by more than one parent via the app. This is already a feature several competitors offer.