Taking a Step towards banking for under 18s

A new mobile bank is in the works ready to target American teenagers, with a cashless-centric approach to banking. 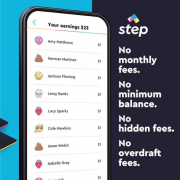 Called Step, it aims to replace the likes of Venmo by targeting the “pre-banked” population. That being children and under 21s in the US – who are forced to use cash.

The duo founded Step in May 2018, bringing along some of Gyft employees.

According to TechCrunch, last summer Step closed on $3.8 million in seed funding from Sesame Ventures, Crosslink Capital and Collaborative Fund. Crosslink general partner Eric Chin sits on the board.

The start-up says teens under 18 still need parents’ approval to sign up.

Step will offer a combination of a checking (current) account, savings and a Visa card that works as both credit and debit.

The card includes Visa’s zero liability protection on all purchases from unauthorised use, and allows parents to set spending limits.

Step’s bank account is backed by Evolve Bank, which means it hasn’t acquired its own licence yet.