“You can think of the history of the banking system as a history of disintermediation — we’ve gone from almost being in the middle of every single financial transaction to playing a smaller and smaller role.” 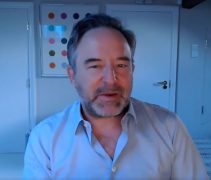 This is the sobering assessment of the role banks now play within a changing and volatile financial landscape, made by Paco Ybarra, CEO of Institutional Clients Group at Citi.

Ybarra, in conversation at Sibos 2021, says that despite rapid and disruptive technologies, banks like Citi must work with, rather than against, change.

Even outside of the pandemic, Ybarra says the pace of change in recent times has accelerated, a fact he attributes to “the world becoming much more digital”.

Ybarra says it’s this competition, which has received an “avalanche of capital”, that is disrupting the banking industry from the outside and is able to attract very high valuations and a lot of resources.

“Sometimes we find also that we are subject to some degree of competition from people that are not regulated to the same extent that we are.”

The CEO claims this uneven playing field is evident in the realm of cryptocurrency, and that digital assets can be viewed as a threat to the banking system as they have the appearance of alternatives to money and are networks that completely circumvent the banking system.

Within this constantly evolving landscape, “we just have to navigate all these things and find the places where we can continue to provide value”, Ybarra says.

In this new world of finance, Ybarra is pressed on what role banks like Citi can still fulfil and what new roles they may take on in the future.

Whatever happens, banks must continue to play a fundamental role at the centre of the financial system in a way that “has developed over time and cannot be changed very easily” without risk, Ybarra says.

“Banks are part of the machinery that make the modern economy work,” Ybarra adds, and the world should not disregard the legacy system in the blind pursuit of innovation.

He says banks can also provide a more holistic service to clients and customers, whereas disruptors tend to focus on and improve one element of the business. This “multiplicity” puts banks in good stead within financial services but nonetheless, banks “do not have a right to exist, there is no natural law that says banks are absolutely necessary”.

However, Ybarra doesn’t think we are going to see banks disappear any time soon.

He says that although continually evolving, the “accumulated abilities” of banks to provide services and capital, their history, the depth of their client relationships and a willingness to operate in many different markets at the same time and connect the world, “those things cannot be easily replicated”.

“We cannot operate in a vacuum”

But banks will have to continue to connect with the outside world and the fintech world, so that rather than just managing disruption, through collaboration banks can accelerate innovation. “I don’t think we can innovate by ourselves,” Ybarra says.

Innovation needs the right environment and the right infrastructure in order to occur and these frameworks and platforms are very important.

“We cannot operate in a vacuum,” Ybarra says, adding that the underlying market infrastructure allows banks and fintechs to collaborate and learn from one another, which is why central banks should be responsible for ensuring that infrastructure exists and is continually updated.

Ybarra says that the global payments network Swift, for example, must evolve accordingly and be invested in, “so that we don’t leave an open door for adaptive technologies or infrastructures” such as blockchain and distributed ledger technologies.

Nonetheless, disruptive technologies like digital assets are making waves in the industry.

Ybarra says the digital assets phenomenon has seemingly “come out of nowhere”, in which an asset has value because its users have determined it has value both within the digital and the real world. This decentralised governance and the use of digital assets to assess and transfer value has only been possible since the advent of the web.

“It’s a very remarkable phenomenon, and I think it creates a lot of trouble for the economic authorities,” Ybarra says.

The Internet also allows for a system that can be used to exchange value that is completely independent from the official banking system.

People can move money into a digital wallet and the money that exists in that wallet and between wallets has no consequence on any underlying system or accounts until the money leaves the system again at the end of all those transactions.

“That could lead to a completely new financial system,” Ybarra says.

Lastly, Ybarra claims Central Bank Digital Currencies (CBDC) could see the eventual elimination of checking accounts from banks where all deposits are held by individuals at central banks.

The transition to this “completely new financial architecture”, which cuts banks out of the equation, would be very complicated, Ybarra says.

But the underlying technology of encrypted cryptography and digital signatures that create trust in transactional systems on the web and allows those systems to be decentralised and not require a central authority could still completely revolutionise how markets operate.

Importantly, these technologies have consequences way beyond the financial system.

“Although at this point, I would say the technology is not yet there, we have to keep a close eye on it to see where the threats and the opportunities for us are coming from.

“One thing is for certain; changes are here to stay,” concludes Ybarra.