Sibos 2021: Financial services and the fight against climate change

The COVID-19 pandemic showed what can happen when a catastrophic event tests the global economy. Arguably it was a mere dress rehearsal for what may occur due to climate change. According to scientists and governments, climate change is the key challenge facing humanity. 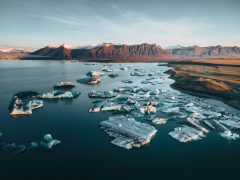 The economics of climate change is coming, and its impact on the industry will be profound

The scale and criticality of the finance industry mean it is particularly exposed to the positive and negative outcomes resulting from whatever happens over the next few years.

So, what might happen? Let’s take a look at some possibilities.

The most obvious impact is likely to be increased market instability.

The Network for Greening the Financial System (NGFS), a collection of 83 central banks and supervisors worldwide focused on tackling the issue of climate change, calls out more frequent and severe extreme weather events as a key concern.

These have the potential for catastrophic consequences on people, houses, agriculture, and industrial complexes.

This will result in those affected unable to pay down debts and insurers responding by increasing premiums and/or stopping insuring some risks, impacting the collateral value of properties and leaving banks exposed to credit risks.

Due to the interconnected nature of global finance, countries less affected directly may still be impacted as they suffer spillover effects from other territories.

Extreme weather could result in large areas of the world being uninhabitable and uninsurable. For example, in 2021, one third of the US was impacted by extreme weather events concurrently through drought, fires, flooding and hurricanes. The knock-on impacts will be famine, lack of access to water and an unprecedented refugee crisis.

All of this is bad news for global markets and is likely to lead to instability, impacting savings and investments and access to credit and insurance for the average person.

The NGFS notes that most of the modelling on risks focuses on potential impacts post-2050. But there is evidence that effects are manifesting much more quickly. The industry has to get a handle on models and risk now so that companies don’t get caught out.

The urgency for change could result in policies that attempt to decarbonise the world suddenly.

Fossil fuel companies and carbon-intensive businesses are then very much at risk, which could lead to repricing of climate-related risks and stranded assets, which could have a knock-on impact on the balance sheets of financial institutions.

Again this will lead to market stress and instability.

Individually, many of us try to do what we can to help, but this is having little impact. Increasingly, governments will have to use policy to drive our behaviour, including how we spend our money.

For example, a house will have to have a particular energy rating to qualify for a mortgage in the UK. Citizens will have to spend on measures to improve ratings before they can access a loan.

Obviously, the government will have to play its part and find funding to help. But increasingly, banks will be co-opted to implement policy through their products and service offerings.

As the world wakes up to the harsh realities of climate change, consumer behaviour will have to change, impacting the product mix of financial services.

Think about BNPL, which has recently exploded onto the scene. It has resulted in larger basket sizes, i.e. people are buying more than they had intended to (not great for curbing consumerism).

According to AdAge, Afterpay found that retailers using the service had a 50 to 200% increase in units per transaction, and Klarna reports a 58% increase in average order size.

It does not take a massive leap of imagination to consider a scenario where BNPL is regulated out of existence as we move to a “do more with less” future. We may well see the rise of new players who encourage a different behaviour, such as save now and buy later (SNBL).

Carbon as a currency or even a coin

Carbon’s profile is going to become more and more prominent in the financial services industry.

On the one side, you will have the industry aiming for net-zero. Institutions and industry connected organisations seeking to reduce their carbon footprints. Technology change will play a part, and it is likely to usher in new standards. Watch out for the rise and rise of carbon-based metrics on everything.

On the other side, carbon, already tradeable, is likely to become more of a consumer-focused asset. Imagine everyone on the planet is allocated a carbon budget every year. It may seem far-fetched, but to manage climate change, it could be essential.

The idea being there is a carbon value for everything we do or buy. A bank’s digital platforms would be an obvious place for the management of this. It would open up opportunities for carbon commerce between individuals and businesses within countries and across borders, with carbon becoming a truly global currency. Conceptually it would be incredibly levelling across geographies, with the developed world having to rebalance and pay for its consumption.

So, the economics of climate change is coming, and its impact on the financial services industry will be profound.