I am continuing with my series of “big things that matter”. This week, I turn to globalisation. 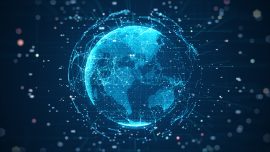 Regarding globalisation, there are two contradictory forces at work.

On one side, we have a world that is becoming increasingly homogenous, which I’ll take a look at first. On the other side, we have an emergent technology cold war between the US and China.

As COVID shut international borders, people everywhere have become increasingly reliant on digital. From communication to commerce, entertainment and finance, we have collectively “piled in”. Much of what we have access to is global.

I was recently on a Zoom call with the CEO of a bank based in Burundi. As we chatted about the fintech scene in East Africa, he talked about “the global consumer”.

His point being that someone in Gitega, the capital of Burundi, is consuming the same media through Netflix, Disney and so on as someone sat in London, Sydney and Rio. They have access to the same news and socials, the same shops and crucially access to the same crypto finance platforms.

As consumers, we are becoming more and more unified through what we can access, and now through crypto, it would seem that a global currency is tantalisingly close.

For some FS companies, the crypto penny has dropped. And guess what, the international players are first off the blocks. PayPal and Visa are a case in point.

PayPal is rolling out its Coinbase competitor in the UK before looking more globally.

“We are committed to continuing to work closely with regulators in the UK and around the world, to offer our support and meaningfully contribute to shaping the role digital currencies will play in the future of global finance and commerce.”

Visa has looked to launch its crypto credentials by buying “CryptoPunk”, an NFT-based digital avatar, for $150,000. Why? I think to get headlines around how seriously they are taking digital currencies.

“We see great potential for digital currencies to extend the value of digital payments to a greater number of people and places.”

I suspect as PayPal, Visa and others “lean in”, we will see the emergence of a new breed of crypto-focused fintechs that are genuinely global in proposition, branding and appeal.

So, let’s look at the other side of the coin – the new cold war. This is important for many reasons, but in the context of this article, because it involves crypto.

There has been a significant hardening of relationships between China and the US recently. Rhetoric has become sanctions, and every day seems to bring a new story of tit-for-tat mudslinging from both sides.

Fundamentally, this is about dominance on the global stage. China, driven by government policy, really has been through an extraordinary transformation over the last few years to the point where it is now challenging the US.

By encouraging public-private collaboration, it has driven innovation at an enormous scale, bypassing the legacy and technical debt of the West, and in so doing has found a path to being a predominant trading force globally. It is looking to consolidate this position through initiatives such as The New Silk Road and Smart Cities using blockchain, 5G and AI.

Technology has literally transformed China. So, make no mistake, this new cold war is about dominance in technology, and at its heart, blockchain, crypto and their uses. China is building new digital infrastructure using blockchain technology, and because it is digital, it can span the world. This dragon hasn’t been sleeping, it has been building.

So used to its global dominance, the US can see China is pulling ahead in the invention and application of these technologies. Is it prepared to hand over the digital airways to China? Nope.

The US’s more bottom-up approach, championed by big business and the political right, currently lacks the same cohesion as China’s. There is little evidence of similar stated public policies. In fact, the US has to deal with big tech businesses that almost feel beyond control. If Apple were a country, its GDP would be bigger than Italy’s and Russia’s.

I am not qualified to say either side is right or wrong. But this feels big to me.

Why is this important, and where does it leave us all?

We are already in a position where China’s approach is bifurcating from the West’s. It may be that many governments will be forced to decide which way to lean – East or West. And this will affect everyone and impact the trend towards globalisation.

But the simple fact that the US and China are engaged in a cold war triggered by technology, and in particular blockchain and digital currencies, demonstrates just how important they are.

Understanding more about this new world of crypto and blockchain is imperative for all. Just don’t take your eye off global affairs.