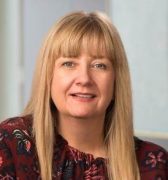 Joanne Hannaford will take up the role on 1 January 2022

Hannaford, who will also be made a member of the executive board of Credit Suisse Group, will take up the role on 1 January 2022 and report directly to the Group CEO, Thomas Gottstein.

Hannaford joins from banking giant Goldman Sachs, where she has spent 24 years in a number of senior roles, most recently as head of EMEA technology and global head of quality assurance engineering.

Speaking on the appointment, Credit Suisse chairman António Horta-Osório says: “Technology is and will increasingly be a key success factor in financial services and with her skills, Joanne is well positioned to lead our strategic efforts going forward.”

James Walker, the firm’s current chief operating officer, will continue in his role until the end of the year, when he will switch to his new role as deputy CEO of Credit Suisse Holdings (USA).

The bank says Walker wanted to be based in the USA for family reasons.