Affirm eyes IPO with up to $10bn valuation

San Francisco-based lendtech, Affirm, is considering an initial public offering (IPO) at a valuation of up to $10 billion.

According to the Wall Street Journal (WSJ), Affirm could begin trading this year. It adds that its IPO options include debuting via a special purpose acquisition company (Spac).

The point-of-sale (PoS) lender is working with Goldman Sachs Group on a potential listing, according to WSJ sources. 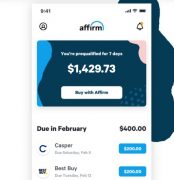 It adds that its IPO options include debuting via a Spac.

The preparations are at an early stage and the company may not move forward with one.

In April 2019, the company had a $2.9 billion valuation, but its target has crept up since then, to over $5 billion and even close to $10 billion, according to the WSJ.

Founded in 2012, Affirm’s business offers shoppers the ability to pay for goods in instalments via short-term loans.

The company’s financing option is visible on the checkout pages online for big brands like Walmart, Expedia Group and soon the ecommerce app Shopify.

The deal with Shopify came as the latter company was looking to enter the testing phase for its buy now, pay later (BNPL) product, Shop Pay Installments.

Kaz Nejatian, vice president and general manager of Shopify’s financial solutions team, says it was critical for companies to make it easy for customers to buy from them.

The news comes at a time when the IPO market is recovering from a low point during the worldwide quarantines in the spring.

Recent IPOs have emerged from companies that predominantly focus on digital and mobile business. Sectors like BNPL, remittance, payments and insurtech, have thrived despite the pandemic’s economic effects on the financial services industry.

The BNPL sector has recently reached new heights due to consumer spending habits amid COVID-19.

Klarna has managed to launch in Australia, while continuing to sign big brand deals.

Sezzle recently raised $60 million and formed a partnership with Plaid.

Afterpay also went public this year, whilst Fly Now Pay Later landed £35 million in a Series A funding round.