Unveiling its new name and website after previously being referred to as SC Digital, Mox is set to launch later this year. The challenger’s tag line is “to help everyone in Hong Kong grow”, and will be introducing an all-in-one numberless bank card like the Apple credit card.

With no numbers – including expiry dates and card verification values (CVVs) – the card design will aim to reduce the risks of losing personal information, instead keeping all card information accessible through the Mox app. As well as Apple, Singapore’s Grab and Santander Mexico are some of the others to issue numberless bank cards across the world. 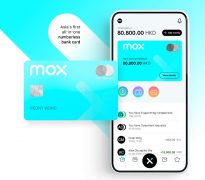 Standard Chartered, PCCW, HKT and Trip.com received one of the first approvals to set up their virtual bank in March last year from the Hong Kong Monetary Authority (HKMA), after which five other virtual banks were approved.

“Mox operates in a whole new way by listening to customers and focusing on heart share,” says Mox’s CEO Deniz Güven. “We aim to empower Hong Kong customers to grow and unlock more possibilities by providing a truly digital and personalised banking experience.”

The bank chose the round shape of a Hong Kong dollar coin as inspiration for the brand logo, which it says is “a nod to our roots”. It will refer to its customers as ‘Generation Mox’, describing them as “a creative, curious and connected tribe”.

Currently in beta testing, Mox will come up against competition post-launch in the Hong Kong challenger bank space. China’s ZA Bank began testing 2,000 users in the HKMA sandbox last December after it secured a licence to operate in the country, and Hong Kong’s own fintech WeLab raised a notably huge $156 million in December to launch WeLab bank sometime this year.

Players operating in the country already include Tandem Bank and Revolut, and other entities which have secured virtual banking licences from the HKMA include Ping An OneConnect, Livi Virtual Bank, Insight Virtual Bank, Fusion Bank, and Ant Financial.