The US Department of Justice (DOJ) has stepped up its investigation into Deutsche Bank’s role in the €200 billion ($220 billion) Danske Bank money laundering scandal, four people familiar with the inquiry told Reuters.

One source said the DoJ’s new line of inquiry is whether Deutsche helped move tainted money from Danske, Denmark’s largest lender, into the United States. If proven, that could lead to steep financial penalties.

Officials from the DoJ, who have been working closely with Estonian prosecutors for around a year, have also begun cooperating with Frankfurt state prosecutors, the sources said. 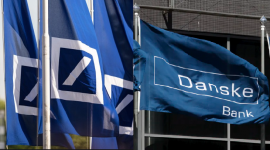 The DoJ and Frankfurt state prosecutors declined to comment on the US investigation, which two sources told Reuters is due to be completed next year.

Deutsche Bank’s spokesman said it had significantly improved controls in recent years. “We have repeatedly stressed that we are in a good and constructive exchange with the authorities,” he added.

Danske’s admission last year that suspicious payments totalling €200 billion from Russia and elsewhere flowed through its branch in Estonia has triggered worldwide probes. The bulk of these payments were processed by Deutsche, sources have previously told Reuters.

Although the DOJ requested information from Deutsche last year relating to Danske transactions, at the time its executives believed that the investigation was focused on Danske and that the German bank itself was not a target.

If proven, that could lead to steep financial penalties.

However, Deutsche officials were made aware in recent months that the scope of the DoJ probe had broadened to the bank’s role in facilitating the Danske trades and its possible failure to report suspicious transactions quickly enough, one of the people said.

Deutsche has already paid nearly $700 million in fines by New York and British regulators in a separate money laundering case involving $10 billion in so-called mirror trades from Russia, which the DoJ is still investigating.

US investigators have spoken to current and former Deutsche compliance staff in the U.S. who raised concerns over possible suspect transactions with supervisors but were ignored, two people said, adding that some involved Danske.

Estonian prosecutors are sharing their findings on Danske, hoping they will share in the proceeds in the event of US fines, four people said. One source said Estonian prosecutors are examining more than ten transactions involving up to $2 billion of suspect criminal funds in total. Reuters could not ascertain the details of those deals.

Washington and Frankfurt are now asking what led to the delay and whether there were lapses as some of the contested money transfers, which were earlier singled out by compliance staff, are among those Deutsche later flagged, two people told Reuters.

Frankfurt prosecutors have also questioned Sylvie Matherat, Deutsche’s former top official in charge of anti-moneylaundering and the highest ranking of ten Deutsche bankers and executives they have interviewed.

Matherat, who left Deutsche this year, and the others were interviewed as witnesses whose first-hand knowledge is being drawn on to form an overall picture, the person said. Matherat declined to comment. A Deutsche spokesman confirmed she had been interviewed as a witness.