Lithuania is going full speed ahead at becoming a top fintech hub in Europe after it recently introduced a set of reforms to attract foreign firms. Although the Baltic country has managed to attract new talents in recent years, it is now looking to bring more headquarters and C-level executives with the view of becoming a key fintech decision centre.

Speaking at the Startup Fair in Vilnius at the end of May, the mayor of Lithuania’s capital, Remigijus Šimašius, said the city was willing to bring new innovative and disruptive ideas in town and would like to welcome more start-ups and entrepreneurs with the view of creating a real ecosystem.

This is precisely what Lithuania has been doing with the fintech sector over recent years. A report published by Invest Lithuania in February this year showed that the fintech ecosystem grew by 45 percent in 2018, with some 700 new positions created.

“Almost 2,700 specialists are employed in the sector across a wide range of positions and functions,” the report notes. “Many of the local fintech teams are tasked with providing mission-critical services, like customer support for an entire firm or all the development and testing for brand-new products,” it added.

The authors of the report concede that, at the moment, most teams in Lithuania are smaller in scale, but they argue that this situation is set to change rapidly, with 88 percent of the fintech firms saying that they are planning to further expand their Lithuanian teams in 2019.

However, what Lithuania needs now are high-ranked executives in charge of companies’ leadership. This will allow the country to position itself as a real decision centre in the world of fintech.

In an interview on the sidelines of the conference, Daumantas Dvilinskas, CEO of the firm, argued that he and his co-founders first met at university in the UK and therefore decided to launch TransferGo in London.

He went on to say that “although TransferGo originally launched in London in 2012, the Vilnius office is actually the largest in size in terms of employees, with most of the developers being based in Lithuania where the firm owns a licence.”

As a way of showing its strong commitment towards keeping a footprint in Lithuania, TransferGo has recently recruited three new C-level executives from abroad.

“We have managed to hire three C-level executives for instance who are relocating from Berlin,” says Dvilinskas when speaking at the Start-up Fair conference the day before. “Of course, their Lithuanian spouses have helped a lot in convincing them to relocate to Vilnius and I would like to thank them for that,” he added – raising laughter in the audience.

In private, Dvilinskas added that: “bringing C-level executives in Vilnius was a big success for the firm. People don’t necessarily need to be based here full time, but they can commute regularly, especially thanks to the new airline opened between Vilnius and London City airport.”

The recruitment shows an interesting move for TransferGo, which has recently secured $17.6 million in series B funding and is now looking to scale up its business, by launching new products lines in the B2B sector and by targeting new emerging markets. 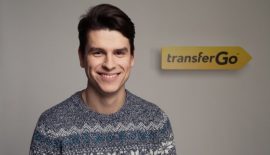 It also comes at a time when many fintech firms currently based in London are looking for a second home as the UK is preparing to leave the European Union.

In an interview with FintechFutures, Lithuania’s minister of finance, Vilius Šapoka, did not elaborate his view on Brexit, but admitted that the current political situation in the UK brings huge uncertainty to the financial industry.

He added that Lithuania and the UK have enjoyed a very strong relationship over the years, because “we are like-minded countries,” when it comes to regulatory frameworks and policy development.

He went on to say: “quite a few fintech firms are considering the option of moving their offices to Lithuania, but I do believe that those tight relations between Lithuania and the UK will be preserved and even strengthened despite Brexit.”

Šapoka nonetheless made a call for Lithuania to become “the number one fintech hub in Europe”.

To do so, Lithuania has set up a strategy called STIG, which stands for Start, Technovate, Invest and Grow.

A number of incentives for fintech start-ups to relocate to Lithuania were set up as a part of this strategy, such as: tax rebates; a start-up programme where new entrants are being helped by the Central Bank to deal with various legal issues, especially compliance; a regulatory sandbox for fledgling businesses as well as a framework to encourage future development; R&D expenses being deductible three times; and competitive taxation rates for companies providing investment and employment.

“We are headed on the right direction and Vilnius has now been put on the map as a place everybody is talking about,” says Dvilinskas. “This is the first step, and if we continue on the same path – to talk about Vilnius and if we are still visible – everybody will understand how amazing Vilnius can be compare to other big cities in Europe when it comes to doing business, and also live here.”

Fintech firms welcome these initiatives and encourage the government to pursue its efforts.