Fintech Inn 2018: why Lithuania has enlisted the Stig 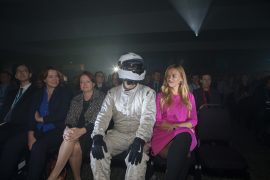 There’s an unlikely connection between the enigmatic figure from Top Gear and the Baltic nation’s ambitions to accelerate its growth as a centre of fintech innovation.

Lithuania underlined its credentials as a fast-developing centre for blockchain innovation when it hosted the #Switch 2018 event in late September. This was followed last week by its third annual Fintech Inn conference, billed as the largest fintech event in the Baltic region and which attracted an estimated 1,300 participants to the capital city of Vilnius.

In addition to the fintech programmers, business developers, marketing specialists and blockchain/crypto enthusiasts that made up the audience, presenters included government ministers, regulators and representatives from the central bank.

For those from outside the country, it’s evident that Lithuania’s drive to establish itself as the primary fintech hub of the Nordic-Baltic region is helped by the youth of senior personnel within its Ministry of Finance; the Bank of Lithuania; the Agency for Science, Innovation and Technology; and Invest Lithuania – the four joint hosts of Fintech Inn. Baby boomers are notable by their absence; indeed even the number of executives from Generation X appears outnumbered by those from Generation Y.

As opening speaker Vilius Šapoka, Lithuania’s minister of finance, noted the factors contributing to the country’s rapid growth as a fintech hub are summarised in the acronym STIG. The minister’s stage prop of a racing driver’s helmet confirmed that any connection with the figure from television’s Top Gear is entirely intentional, the four letters standing for Start, Technovate, Invest and Grow.

So incentives for fintech start-ups to locate in Lithuania include tax holidays; both a regulatory sandbox for fledgling businesses as well as a framework to encourage future development; R&D expenses being deductible three times; and competitive taxation rates for companies providing investment and employment.

The central bank has also encouraged dialogue between the banking sector, regulators and traders on how the crypto sector can be effectively regulated without innovation being stifled in the process. “We decided not to ignore cryptocurrencies and pretend that nothing is happening,” says Šapoka. “There’s the need for a clear regulatory authority that incorporates anti-laundering measures.”

Last year, the Bank of Lithuania published its guidelines on cryptocurrencies and the initial coin offerings (ICOs) that have become popular with start-ups seeking to raise capital. It emphasised the need for a “clear separation” between traditional financial services and crypto-related activities, but the bank’s willingness to issue licences more cheaply and speedily than many other jurisdictions meant that in 2017 the €500 million that Lithuania attracted in ICOs was exceeded only by the US and China. 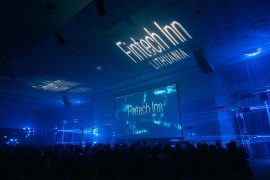 “We’re curious about the technology behind crypto assets,” confirms Marius Jurgilas, a board member at the Bank of Lithuania. “At the same time, we have a strict policy stance – none of the entities licensed by the bank is allowed to hold crypto, which would be engaging in something outside the regulatory perimeter.

“So if a crypto exchange isn’t ready to comply with the regulation they are free to go elsewhere. We’re not building a crypto haven, although we are willing to facilitate innovation.” Jurgilas is himself aware of the dangers of so-called ‘light touch’ regulation; working at the Bank of England for three years from 2008 he witnessed first-hand the emergency measures agreed to prevent the imminent threat of ATMs running out of cash.

He acknowledges that the many fintech companies that have started up in Lithuania will be followed in time by a number of mergers and inevitably some failures, but this is an acceptable price provided that the latter does not trigger systemic risk. “We want to see sustainable growth, but we need to achieve that initial leap and momentum if Lithuania is to develop as a fintech hub.

“Advisory services and asset management may well be the areas that are next to develop. The aim is to maintain a fine balance between entrepreneurship and stability.”

As Vitas Vasiliauskas, the Bank of Lithuania’s governor, noted in his conference speech the private sector is generally regarded as the facilitator of change while the authorities are seen as struggling to keep pace with change. However, in recent years the central bank has set itself the remit of acting both as a supervisor of fintech but also as partner, assisting in the setting up of new businesses.

“The emergence of mobile payment platforms has been a game changer, with consumers increasingly choosing innovative solution,” he told delegates. “The opportunities haven’t yet been fully exploited though and we want to see companies that offer real solutions to the public.” A recent survey of Lithuanian consumers found that one in five still has no bank account, which are widely regarded as too expensive and the country is still well behind some of its Nordic neighbours in moving towards a cashless society.

Jurgilas says that rather than attempting to reduce the number of cash transactions, Lithuania’s aim is to increase the number conducted electronically, by facilitating competition and cutting the cost of cross-border payments. This has seen telecom operator Telia Lietuvos (TEO) agree with its two main rivals to pool their respective customer bases in a joint venture to develop new payment methods, although the move was challenged by the European Commission. 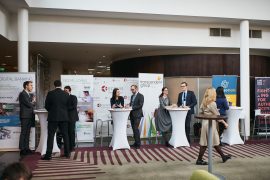 Fintech is one of three “breakthrough areas” that Lithuania is keen to develop, according to the mayor of Vilnius, Remigijus Šimašius – the other two being life sciences, including biochemistry and electronics, with a particular focus on laser technology.

The capital city’s encouragement of these sectors is reflected in the growing number of steel and glass towers located on the north bank of the river Neris, adjacent to but separate from the historic centre. The newest Vilnius landmarks also include the just-opened MO Modern Art Museum designed by Daniel Libeskind.

Šimašius is proud of Vilnius’s steady ascent up the rankings of the world’s smart cities. Seven years ago, the city launched Europe’s first electric bike share scheme and has since beaten London as the first to launch electric car sharing via provider Spark. A monthly public transport e-ticket system introduced more than a decade ago was succeeded in 2012 by the launch of the Vilnius Citizen Card (Vilniečio Kortelė) and much of the city’s bus and trolleybus network is undergoing an upgrade programme.

Tied to its ambitions to be a major fintech hub Vilnius has also pursued an open data policy since Šimašius was elected as mayor in 2015, which he describes as “a pre-requisite for developing innovative solutions for private businesses”. Using the mobile app Tvarkau Miesta (Orderly City), residents can find the quickest route to work, report issues to the relevant authority and access data on the city’s finances, public procurement and real estate.

In addition to mounting events such as #Switch and Fintech Inn, Lithuania is pursuing various initiatives to strengthen its fintech credentials. The most recent include last month’s cooperation agreement signed by the Bank of Lithuania and its counterpart in Ukraine to work together in promoting financial innovation.

Fintech Inn took place only days after Lithuania’s president Dalia Grybauskaite met with China’s president Xi Jinping in Shanghai to further promote trade between the two countries. In 2017 Lithuanian exports to China increased by 50% and bilateral trade turnover rose 20%, reaching €1 billion and earlier this year Šapoka spoke of Lithuania’s ambitions to become the gateway to Chinese financial services for Europe. 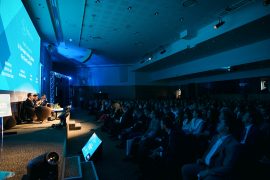 However, not all the messages emanating from this year’s Fintech Inn were uniformly upbeat, with one panel discussion posing the question “Is Europe losing the global fintech battle?” It offered a salutary reminder that despite the continent’s ability to innovate, with several locations competing with Lithuania to be the primary fintech hub, Europe’s biggest tech heavyweight is currently Spotify and it lacks a contender to rank alongside the US’s Apple, Amazon, Alphabet, Microsoft and Facebook, or China’s Alibaba and Tencent.

Panellist Michael McDonough, chief economist for financial products at Bloomberg, singled out three drivers of a prosperous fintech where he suggested Europe is lagging:

A robust and innovative capital structure: Much of Europe’s fintech funding still comes from banks and some bond offerings, while the US has a range of innovative financial products providing capital to the tech sector and China offers state-sponsored funding.

Access to a large unsegregated client base: Despite the advent of the single market, Europe is still hampered by several barriers as well as a language issue – any new fintech app needs to be offered in a variety of different languages to be successful. Fintech adoption has also been strongest in countries where cash usage is still widespread.

Human capital: While Europe has a strong educational system, the US has the advantage of widespread mentoring as experienced individuals lend their expertise to new start-ups.