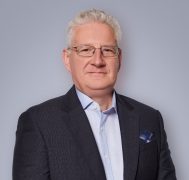 Marc Jenkins, new CFO UK at The Bank of London

Jenkins will also become a member of the executive management committee at the firm.

The Bank of London says that in his new role, Jenkins will be responsible for “all accounting, finance and corporate treasury” at the company and will “also work with the senior leadership team to support its commercial agenda”.

He joins the firm from Metro Bank, where he spent almost two years as deputy CFO and later acting CFO after David Arden stepped down earlier this year.

Jenkins also previously served as CFO and member of the board at ClearBank for almost four years, leading the bank’s strategic planning, financial and regulatory reporting and treasury operations, including capital planning and management. He has also held roles at NatWest Group and Mastercard International.

Speaking on his appointment, Jenkins says he is joining the company at “a pivotal time in its journey” and he aims to help support the bank’s “long-term and sustainable financial performance”.

The bank also appointed a new co-president and group chief product officer in July and a new deputy CEO for the UK in April 2022.

The company launched in November 2021 at a valuation of $1.1 billion.