For post-pandemic visitors to India, one major societal change will not go unnoticed: the country’s transition to a cashless economy. 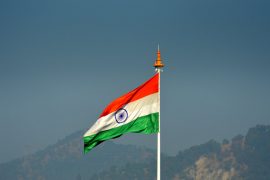 Those who visited before the pandemic hit will know how cash-dependent the country previously was.

The pandemic spurred this change and now, be it shop owners or street-side vendors, most Indians prefer to use their phones to make and accept payments, a majority of which is done via UPI.

Short for Unified Payments Interface, UPI was developed by the National Payments Corporation of India (NPCI) and went live in 2016 with 21 banks. That ecosystem has now grown to 358 banks as of September this year.

Its transaction volumes grew at a steady rate pre-pandemic too, but saw massive growth during the pandemic, signalling that the digital transition was well underway. UPI is currently handling around 6.5 billion transactions per month.

Pegged at $31 billion, India’s fintech market ranks third in the world, trailing only the US and China, and analysts at Inc42 are betting the market opportunity will be over $1 trillion by 2025. India’s fintech adoption rates are also some of the highest in the world, standing at 87% compared to the global average of 64%.

And the country is living up to the hype. In May this year, India celebrated another unicorn – Open – a Bengaluru-based, Google-backed neobank that secured fresh funding in its Series D round, taking its valuation to over $1 billion. Today, there are more than 20 fintech unicorns in the country, with many in the pipeline poised to join the burgeoning list.

Despite this stellar growth, the year 2022 hasn’t been kind to the global start-up industry – and India hasn’t been immune to the challenges either. Layoffs and reduced funding have affected scores of Indian fintech companies. According to various media reports, Indian start-ups have already laid off more than 10,000 employees this year, following the highs of last year which saw a number of companies go on hiring sprees.

However, the market turbulence has not discouraged domestic nor international players.

Revolut, the UK’s banking super-app, is gearing up for its India launch having recently appointed Saleem Arshad as the chief technology officer (CTO) for its India operations and inaugurating its new head office in Bengaluru.

Another UK-based financial platform, Tide, which provides digital banking services to small businesses and entrepreneurs, also announced its intention to launch in the country, and is currently allowing users to sign up for early access. It plans to launch full-scale operations in the country sometime this year.

Domestic players won’t be left behind in the race though, including the likes of challenger banks Jupiter, Niyo and INDMoney.

India’s regulatory landscape is also evolving along with the fintech industry. At the recently concluded Global Fintech Fest 2022 held in Mumbai, the Ministry of Finance and the Reserve Bank of India’s (RBI) governor made a slew of speeches highlighting their intentions to further develop and support fintech’s growth in India.

The Reserve Bank of India (RBI) recently organised its first global hackathon with “smarter digital payments” as its theme, created a new fintech department to help guide the sector, and is also working on creating its own central bank digital currency (CBDC).

The country’s IT minister, Ashwini Vaishnaw, also stated that one of the government’s key focus areas would be building a “robust” digital infrastructure and regulatory framework for the fintech space, with an eye on social inclusion.

However, a new report by Matrix Partners India and Boston Consulting Group (BCG) says that while Indian fintechs have made a “strong contribution” to the economy, reaching over $800 billion in annual payment transaction volume, they might not rake in any profit for the next two to three years.

It surveyed 125 founders and executives of fintech companies, of which 70% believed they may not be profitable in the near future due to an increased focus on scale as opposed to profitability and compliance.

“We’re at a fork in the road in the India fintech story with sceptics raising many questions,” says Vikram Vaidyanathan, managing director at Matrix Partners India. “Indian fintechs have undeniable scale, provide superior value to customers and have emerged resilient through a once-in-a-lifetime crisis in Covid.”

However, to continue the success, Yashraj Erande, managing director and partner, BCG, says “new muscle” will be needed for newer priorities, such as profitability and governance.

“Growing together in partnership with incumbents and private innovation on public utilities will be key moats,” Erande adds.

In conclusion, India has proven that it offers fertile ground for fintech start-ups. But is that enough to make them profitable? Only time will tell.