I was reading a John Green novel a few weeks ago and one of the characters spoke of his future in terms of looking for that “great perhaps”. 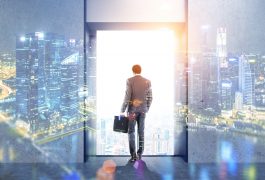 A young man, hoping to get to an inflection point where the future looms opaque and unpredictable. Where life starts happening. No more painting by numbers and going through the motions of hand-me-down expectations. But a future made up of things that cannot be known in advance of them happening because the person you will be when you face them is yet to be.

It’s a beautiful phrase, isn’t it?

And a heady feeling, when the unknown with all its terror is something you embrace and look forward to because the alternative is drab, repetitive and stale.

I like the hope packed into the great perhaps. The acknowledgement that it doesn’t guarantee you anything other than a chance. And the realisation that there isn’t much more you can ask for.

Why do we make things so complicated?

Partly because it makes us sound smart, I guess.

And partly as a defence against the great perhaps.

What do banks do, really?

They move things of agreed value (let’s call it money or things that stand in for money) in time and space.

A payment is a movement in space.

A loan is a movement in time.

They manage the risk associated with those movements and levy fees for that function.

And they report on all of the above because they have to.

How they do it is where the fun begins.

Financial instruments and complex vehicles fall in this how bucket. What they do is set. How they do it – what the triggers, steps, requirements and fee structures are – can be weird and wonderful, but the what is set.

Complex governance structures, systems and technology, humans and legal entities. Hardware, software, offices, resolutions and human toil, all fall into the how also.

And they add complexity, sure.

Often for the sheer fun of it.

Occasionally in the hope of obfuscation.

Sometimes because humans genuinely get so carried away with their part of the how as to lose sight of what is immutable and what isn’t.

So fine. The what of banking is straightforward. The how, less so.

Tell us something we don’t know, you may be thinking.

But that’s the point.

There isn’t anything you don’t know here.

We have spent a decade and a half trying to simplify the how of a rather straightforward what. We have deployed technology in a million ways, we have spent billions transforming parts of banks and the wider adjunct faculty of financial services firms whose entire raison d’être has been to vertically support little bits of this how, so doing their bit better is all they can possibly do, really.

This is less about turkeys voting for Christmas and not exactly about people focusing on building a faster horse because they can’t imagine the car. The how we are speaking of is so unnecessarily complex that what we are left with is turkeys riding the horse in the conviction that, if they keep going, they will outrun Christmas.

And since by the time you read this, we will all have just emerged from Christmas and you will be replete, overfed and will probably not want to think of turkeys for a few months, the analogy should be as uncomfortable and counter intuitive as the idea of continuing to deploy the best of human endeavour against tweaking the entirely circumstantial and over-engineered how of a rather straightforward and unambiguous what.

So, another year begins, and it’s never a clean page.

It’s the same me and the same you and the same notebook from my last working day in December with a memo to myself with a list of things to chase, pick up or follow up on.

The industry loves a pivot but never for itself.

And here’s the rub.

We have the tech. It’s here. It’s awesome. We occupy a singular moment in history where technology is having a renaissance moment the likes of which we have never seen before. There is so much of it. It’s scaling and maturing and it’s there to solve whatever problem we point it at.

That we point it at the how and not the what is a failure of imagination on our part. Or courage. Take your pick.

But if you ask me for my hope for this new year it is simply this: we have the tools to move away from what we’ve always known and what we’ve always done, to radically depart from the familiar shapes and say “OK, if this is what I need to do and these are the tools I now have to do it with, I should not try and tweak what I inherited but rather wonder what is possible”.

The great perhaps of our industry.

It’s literally just beyond our doorstep.

And the only thing that stands between us and finding out what could be is, well, us.