In your own time

It took me forever to understand there is such a thing as ‘Big Bank Time’. 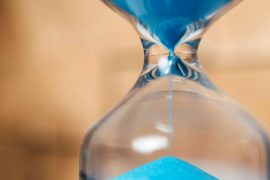 I’ve written before about my old boss who would clear his diary for a week to prepare for a meeting with his own boss (for reals, insanity) and would get briefed for client meetings on the central line. On the way to the meeting. All I’m going to say is, my hearing isn’t great at the best of times and holding up a printout of a PowerPoint while trying to hear what on earth he was saying over the rumble of the train and while trying to avoid elbows to the ribs is not an experience I want to repeat.

And as I look back, what was the point anyway?

Edits were not exactly an option back in the day of printed and bound presentation packs (yes, I am old, go away).

That always felt like a peculiar choice my boss made.

But as the years passed, the pattern emerging was telling. Because it wasn’t about meetings. It wasn’t about managing internal politics and the skewed priority structures of a bank’s own hierarchy of needs. Although it was about all this. It was also not.

What it was about, was time.

Not getting metaphysical here. Stay with me.

All these choices were not about power. They were about time.

Because what historically happened inside banks, in deed if not word, is that everyone acted as if time belonged to the bank. And inside the bank, time belongs to the most senior person involved in whatever you are doing.

If you have ever tried to persuade a bank that *insert technology, capability or way of working here* is real, robust, scalable and here to stay, whether they like it or not, you have invariably come to realise that the banking institution you are speaking to and the industry overall has long operated (increasingly less so but not universally yet) on the assumption that the bank itself, or the industry at least, set the tempo of how things evolved and what was done and what wasn’t.

When banks looked at new technology 10 years ago, it never occurred to them that technologies they didn’t pick up stood a chance under the sun.

The bank was in control of whether something would be true. And when.

The understanding was always there that any bank could make a choice that would make things real for its peers and competitors. As could the regulator. But you get my point. The industry was in the driving seat.

Obviously that has been proven to be patently untrue but it has had a profound, insidious and lasting effect on the people raised inside those organisations because, even after they learn that they, actually, very much do not get to determine whether APIs ‘are a thing’, whether crypto will ‘ever catch on’ or whether cloud ‘has a future around here’ (all real conversations I have had with C-suite bankers over the past couple of decades), and even after they grudgingly or enthusiastically realise that the future is coming, ready or not, they still have habits around time ownership that run deep.

What does that look like when it’s at home, I hear you ask?

It looks like people giving you feedback on a major submission after the deadline you shared with them has passed and being irate you didn’t wait for them despite their seniority.

It looks like the senior person on cc who ignored all your pleas, appeals and meeting invites jumping into a process six weeks in the making and expecting the process to rewind and pause until he digests, digresses and opines.

It looks like a piece of work months in the making, with clients in the room, engineers hard at work, lawyers and PR folks finally agreeing on wording in agreements and press releases, and someone senior saying that it (the whole thing) now needs to go ‘one level up for review’ and expecting ‘oh I don’t like this’ being an option on the menu for the person now invited to ‘review’.

It looks like people not giving you feedback when you ask for it but when their boss is in the room, because that suits their timelines and imperatives and cadence of work, and because their title permits them to bend the space-time continuum.

Or so they think.

You know those guys.

You work with those guys.

You’ve probably worked for those guys.

They don’t realise they are being jerks, most of the time.

But they haven’t necessarily learned that they need to change too.

If you act like the work and the world need to speed up and slow down to suit your own time, preferences and plans because of your rank and position, you are either deluded or a jerk.

Or both. Admittedly, that is also possible.

So let me put it differently, to ensure we are on the same page here: if you think you can dictate timings for the business you are in, irrespective of client needs, market movements and day-to-day operational realities, you are either irrelevant to your business… Or a hindrance.

And I will leave it to you to decide which is worse, in your own time.