The dying art of arguing

I was chatting with my friend Ronit a few days ago. 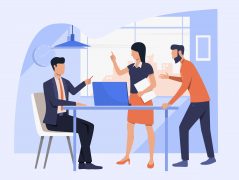 No matter how smart you are, you may, just may, be wrong

We were swapping book recommendations (best kind of friend, if you ask me) and we got chatting about this and that and in the course of the conversation I was reminded of this one time, a few years back, when I had the privilege of interviewing the wonderful Nikhil Kumar at Money 20/20 and I had written a piece subsequently about India Stack and how absolutely inspiring I found the notion of a public good infrastructure, with all the challenges that presents. The vision is bold. It moved me.

And Nikhil is spectacular, and I was and remain an unashamed fan girl.

But not everyone agreed with my enthusiasm for India Stack.

I got some nasty but potentially valid pushback, challenging me to think about mistakes, political tensions and miscalculations made in the rollout of these programmes. The challenge was in the detail and trying to point out I was clueless. Nobody tried to educate me even though they were right, there was a lot there I didn’t know and should think about.

Some tried to belittle me. As if not knowing that stuff made me wilfully ignorant and hopelessly stupid.

And some wanted to kill me.

It was the first and only (for now) time that I have received death threats on social media, and I don’t know how those of you who get them daily cope. It was horrific. Some were direct threats of the ‘I know where you live and you will be dead by morning’ variety. Some were expressions of a wish that someone else would kill me.

It didn’t last, but it was not fun.

Someone threatened to kill me. Over an API.

Over a view held innocently on the other side of the world.

Politics? Our right to have views that don’t chime? The power of the nameless keyboard warrior?

What happened to the art of arguing?

Not arguing as in having a fight, but arguing through the assumptions and implications of any position with a view of understanding what is at stake for each person, what we are solving for, what we may be missing. Arguing to persuade, arguing to convince, for sure. Arguing to find a way through, though. Not arguing to annihilate, dominate and eclipse all other views.

From vaccines to Brexit and football to fashion, we seem to default to venom. If you are not with me, then you are against me.

It wasn’t always thus, and it doesn’t need to be so.

Many years ago, when the topic of the hour was the Iraq war, I had a long and reasoned conversation with a man I neither particularly liked nor had any common ground with. We disagreed on everything. From whether the war was a good idea to the value of human life. But. And this is important. We had a conversation about how we each understood the problem and why we held the view we held. We discussed the inputs and considerations that formed our opinion. We didn’t agree on whether violence was an acceptable foreign policy instrument. We didn’t agree on whether human life was acceptable collateral damage in the pursuit of a higher cause.

Ultimately, we disagreed on a most fundamental level of morality. But neither of us walked away thinking the other naive or stupid. We would never agree. We both regretted the other’s conclusion, but not their reasoning. We would never be friends. But we didn’t part as enemies.

It can be done.

In fact, it should be done.

It is vital to do the homework and share it.

I have a colleague (I’m looking at you, Mark).

He is thoughtful and forceful and will lead from the front.

That means he does the thinking, he forms a view and he doesn’t lack the conviction to pursue it. And he has the position to refuse all argument should he wish to. But he doesn’t wish to. If you disagree with him, he will listen. Irrespective of your role and seniority.

And if you make a good case, he will reflect and adjust.

The idea wins the argument every time.

It’s a thing of great beauty and a sign of wisdom: to know you don’t know it all. To listen, reflect. And maybe adjust, maybe not, depending on the evidence presented. The argument made.

Step two: listen to the thoughts of others in case they know more or have a perspective you lack.

It shouldn’t be hard. Yet it seems nigh on impossible.

Between confirmation bias and wishful thinking lies the graveyard of many a good idea that didn’t get a chance to hatch.

Argue the toss out of things.

Do the homework. Share it. Challenge it. Again and again. Don’t become entrenched. Don’t become defensive. Listen, think. Argue. Don’t fight. But argue. Kick those tyres. Keep going back to the question we are trying to answer, not the view you came to the table with.

An argument need not be a fight.

A belief need not be dogma.

An opinion is meant to be informed and as such meant to change as information flows.

We will never know it all.

A single person will never think it all.

No matter how smart you are, you may, just may, be wrong. And even if you don’t change your mind, having the conversation will teach you something.

So for the love of all that is holy: Argue. It makes you smarter.