Glint, a London-based fintech which provides users with a wallet to hold gold, is going crowdfunding with a “hard cap” of £6 million.

The start-up is raising to fuel its “growth phase”. It wants to improve its onboarding, account funding options, and in-app engagements.

As well as introducing the ability to buy gold with Bitcoin, new subscription tiers, and new products – including business accounts, a 24-karat gold card, new currencies, and retirement savings. 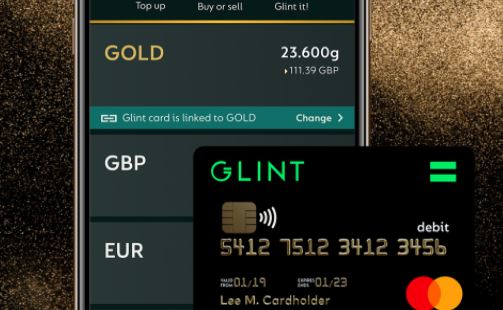 So far, Glint has raised more than £20 million in equity funding

“[We want to] build momentum in growth of users and revenues in the UK, Europe and USA,” Glint adds, pointing to a soft launch in Japan – where it already has a foothold with investors and distribution agreements.

According to its website, Glint is expecting its allocation to go fast. The £6 million cap will cover both lead and retail investors.

The fintech’s current offering enables customers to buy, save, send, and spend in multiple currencies including real gold, which Glint makes liquid via its wallet.

The round has advance assurance from the UK government’s Enterprise Investment Scheme (EIS). This means UK tax-paying investors can claim up to 30% income tax relief on their investments.

The majority of investors can invest as little as £10, but US residents have to invest a minimum of $10,000.

Institutional investors who have backed Glint to date include Sprott Asset Management, the Tokyo Commodity Exchange, and the British Business Bank. As well as individual investor Craig Dewer, the co-founder of GPS.

So far, Glint has raised more than £20 million in equity funding, which has gone towards its payments platform and regulatory fees.

“We have now shifted into growth mode increasing our registered user base by over 40% to 75,000 in the last four months,” says the fintech. It adds that it’s processed £140 million in transactions to date.

Glint slipped into administration in October 2019. The fintech start-up fell victim to a hostile takeover bid that year from a consortium led by Nimoi Holdings, a Singapore-based investment firm.

After being rebuffed on an acquisition bid, Nimoi decided to buy Glint’s debt. The Singapore firm triggered Glint’s administration after the start-up allegedly breached some of the covenants included in the loan. This caused customer money to temporarily freeze.

When FinTech Futures last spoke to Glint, it was in the process of taking the UK administrator to the high court.

But despite a troubled 12 months for the start-up, it used the £5.7 million funding to fuel new products and help it grow.

“It’s great to be back on the growth curve and not be delayed by external issues,” founder and CEO, Jason Cozens, told FinTech Futures back in September. “The whole company is overjoyed that the platform is here.”

Glint’s first product, a multicurrency wallet which includes gold, is linked to a Mastercard. Users can essentially buy a share of a big bar of gold in Switzerland. Glint bypasses the banks which lend out deposits to make money.

Glint claims to have a huge age range in its customer base, from 18 to 80-years-old. Users can buy as little as one penny in gold using Glint.

Read next: Rush Gold launches mobile card to pay with gold in real-time