A new banking app in the UAE is promising its users a “new way” to manage their money. 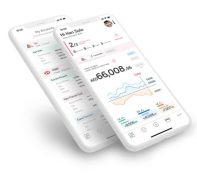 Bankiom has an unnamed partner bank for card issuance

Bankiom offers a card “accepted worldwide”, the ability to send and receive money through chat apps like WhatsApp, and instant payments.

According to the firm, customer accounts can activate in under three minutes, and loan applications approved in 60 seconds.

The fintech says it is a “new way to manage your money” from a firm that “cares and believes in your future”. It promises not to charge any hidden fees for its services.

Bankiom claims to have accrued more than 400,000 signups already. Its cards are issued by an as-yet unnamed “partner bank”.

“Bankiom is not a bank,” its website reads. “Bankiom is for those who want more from their banking experience. Connect and manage all your bank accounts from one dashboard.”

Abla claims he sold another of his ventures, Lebanese payments company, PinPay, to “a leading bank” in 2013.

Bankiom joins a list of challengers in the UAE, including Clearly, CBD Now, E20, and Mashreq Neo.