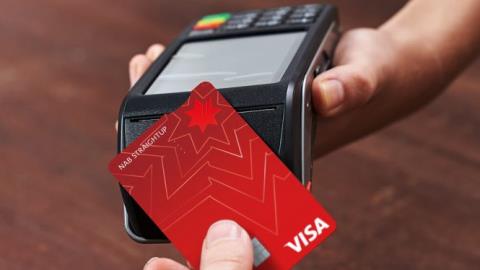 Both cards arrive after the publication of Reserve Bank of Australia data showing a continued decline in the use of that channel.

StraightUp promises that its new card charges no interest, no annual fees, no late payment fees, and no foreign currency fees.

A flat monthly rate is charged, determined by a credit limit chosen by them.

“We started with a straightforward idea – to create a card with no interest, no annual fees and no late payment fees,” says Rachel Slade, group executive for personal banking at NAB.

“Credit cards have not really evolved in recent years. But our customers’ needs and expectations are changing and we want to change with them.”

The bank claim that unlike BNPL companies, the card offers a continuing line of credit, and allows customers to repay balances over a longer period of time.

CommBank announced its new card less than 24 hours after NAB

CommBank’s new card, issued by Mastercard, promises up to $3,000 of credit, and the same lack of fees as NAB.

CommBank adds that customers can access discounts and cash back offers “using the full power of our innovation.”

According to data from Worldpay and FIS, the BNPL market in Australia has doubled since 2019. Almost two in ten Australians have used BNPL services.

The sector in general is set to experience further growth, at a rate of 32%.

Australian BNPL firms have secured a series of hefty funding rounds and acquisitions in 2020. Zip closed a $296 million acquisition of US counterpart QuadPay earlier this month.

Afterpay landed Spanish BNPL Pagantis in a $50 million deal at the end of the August.

Another Aussie BNPL, Splitit, raised $71.5 million at the start of the same month to fuel an expansion into the UK and US.