The union will allow TransferWise’s more than seven million users to send Chinese yuan from 17 currencies to Alipay’s 1.2 billion customer worldwide via its local e-wallet partners. 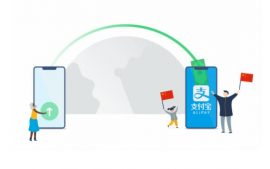 “Our newest partnership with Alipay has been one of the most requested features from our users since our expansion in Asia,” says TransferWise’s co-founder and CEO Kristo Käärmann.

“Alipay functions as the primary payment method for more than a billion people in China,” he adds.

To initiate a transfer in 20 seconds, TransferWise customers just need the recipient’s name and Alipay ID, then the money can be sent to the bank account linked to that particular Alipay account.

China’s digital remittance market has the fifth highest transaction value in the world at $4.9 billion, behind Germany, Saudi Arabia, Switzerland and the US, according to Statista.

The move to work together could seriously boost transaction volumes and user numbers for both parties. And for Alipay, this is just one in a series of major partnerships it has made in the money transfer space.

In January, it partnered with TransferWise competitor WorldRemit to allow the remittance company’s some four million customers to transfer cross border payments to its app.

As for TransferWise’s own partnership movements, it has also enabled global money transfers to six other mobile wallets across three Asian countries, including GoPay, Ovo, and Dana in Indonesia, GCash and PayMaya in the Philippines, and bKash in Bangladesh.