Trio digital brokerage to launch in US by ex-N26 employee

Trio, an all in one digital brokerage and checking account, is set to launch in the US later this year.

The everyday account will be linked to exchange-traded fund (ETF) returns, meaning investments made on the platform will be completely liquid and accessible like an everyday account.

Founded by N26’s first US employee, Neel Ganu, the start-up has been building the platform since early last year. Ganu spent just four months at the German challenger bank setting up its New York office, before moving to zero-commission trading platform Fidelity in Boston and finally founding Trio.

Inspired by the landscape in America, where two in every five people keep all their money in a checking account, and where overdrafts are promoted but give “very little back” in terms of interest, he sees it as time to flip the tables.

“I always knew I could do better,” Ganu tells FinTech Futures on why he started his own venture, “a lot of people know they could do better but don’t get started”. The founder says the start-up is “creating a brand new product category”, and he’s right. 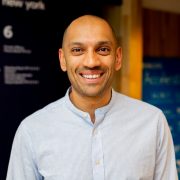 Trading apps such as Robinhood and Stash Invest in the US do not currently link investment accounts to a current account. FinTech Futures previously spoke to Stash’s chief product officer Sudev Balakrishnan, who predicted this year players would “start to expand their product offering, not only helping customers with their long-term savings and investments, but also their everyday spending and short-term goals”.

Trio is focusing on shorter-term investments as its initial product offering. Its way of making money will be two-fold: it will issue a debit card like a challenger bank, but it will also offer a selection of subscription packages. Each level will be determined by a different risk level with the lowest risk being free, and there will also be environmental, social and corporate governance (ESG) investment options.

The platform will therefore work more like a bundle service, categorizing users by the risk they want to take on their investments. It will invest deposits on behalf of customers alongside an investment adviser and – theoretically – deliver back returns. Investments made using the app will not, however, be FDIC-insured outside of a cash sweep option, which means the fintech cannot promise a certain – or any – return on investments.

Read next: The rise of investment apps

“It’s completely automatic once you set your mix,” says Ganu, “and you don’t have to adjust it each day”. Instead of offering the freedom of other trading platforms which allow their users – often seasoned investors – to pick each company, Trio is targeting the population unfamiliar and new to investing.

“We want you to think about this as an everyday bucket of money,” says Ganu, “financially focused people are still not active so they will be our first target market, then we will seek to educate those who are non-financially focused through our platform.”

The start-up will be onboarding its first users internally in the coming weeks and plans to run a private beta later in Q1 this year. It is also fundraising at the moment, but investors and numbers will be announced later this year, and is currently hiring to add to its nine-person team.