How SalaryFits is connecting banks with the unbanked

SalaryFits, the fintech offering the gig economy advances on their salary through their employers, tells FinTech Futures how it’s helping banks tap the underserved population at a fraction of the price.

The fintech works with 51 banks in Brazil which offer payroll loan services – an offering popular in the Latin American country. The start-up also works with 120 employers in the UK, spanning 600,000 British employees. Other countries it covers include Portugal, Mexico, Italy, and India.

Instead of lending the money itself, the company provides the infrastructure to bridge a gap between financial providers, major employers, and those who are unbanked. CEO Délber Lage describes the SalaryFits’ cloud-based platform as an “aggregator” offering employers access to all the national banks.

This is currently the start-up’s model in Brazil, where its business model is most developed. By using SalaryFits’ platform as opposed to partnering with one single bank, employers can gain access to a much wider marketplace of lending, insurance and investment schemes.

Lage highlights the start-up’s main ethos, which is to improve the financial well-being of those gig economy workers underserved by incumbent banks. He calls it the “bank at work” proposition.

“It’s expensive for financial institutions to reach them [unbanked users], so [incumbents] tend to focus on ‘prime’ clients because it’s easier to understand people they already have a relationship with.”

The CEO believes most non-prime users still have a stable job, which is why the start-up has decided to plug into employers’ payroll systems. This way, lenders can receive real-time information which make for better assessments of otherwise hard-to-reach prospects. 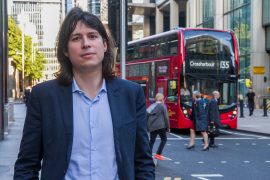 The start-up has more than 3.5 million active consumers in Brazil, and works with the Brazilian Armed Forces, as well as various federal bodies and Swiss food and drink brand Nestle to name a few of its clients.

Employees pay back their advances on their next paycheck, but Lage says the start-up doesn’t charge employers or employees, rather it charges the lenders and only if the employee pays them back. This means the fintech’s data on employees needs to be risk-free in order to get its own slice of the pie.

It’s the big companies which offer far greater scope for the start-up to find gig economy workers which need the services the most. Lage says between 40% and 60% of UK employees, for example, are paying a debt that isn’t a mortgage and paying “way more than they should”.

Last month, the fintech landed $5 million in funding from Brazilian venture fund Confrapar. Lage says this will support some market consolidation, and reveals the company is also in early talks with Colombia, Spain and the US.

Self-funded for 16 years and financing the operations with its own profits, Lage says the start-up grew organically. “We were a fintech in a time when there was no such thing as a fintech,” he says.

Back then, he says employers were not convinced by the proposition, but now the momentum behind employee well-being is a lot stronger. “Everyone else cared,” he says, “the institution was the missing piece”.