Lloyds Banking Group has announced it’s closing 56 more high street bank branches across the UK this year. The planned shutdown has been put down to “changing customer behaviours” and the move towards online banking which has seen a “reduced number of transactions being made in branches”.

Between April and October 2020, 31 Lloyds branches will be shut, as well as 10 of the group’s Halifax branches and 15 of the group’s Bank of Scotland branches. It is understood that Lloyds group has closed a around 655 branches since 2010. 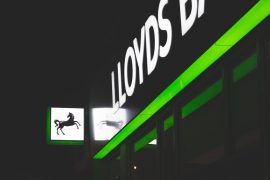 Financial services union Accord says staff numbers may be cut by “under 80” in affected branches, but Lloyds group has not commented on the job losses which will accompany the closures.

“The scale will take some by surprise […] [but] many of the staff are expected to be redeployed into other branches,” says Accord. If they are not redeployed, the banking group says it will offer them voluntary redundancy.

Since January 2015, 55 UK bank branches have closed every month according to a study by consumer organisation Which?, and in the last five years Yahoo Finance says the total number of banks and building society branch closures is 3,362.

A Lloyds group spokeswoman said: “We are committed to having the largest branch network in the UK and, in addition to our branches, all our customers can also use the Post Office to access their banking locally, alongside our mobile branches which visit many rural communities.”

In 2018, the bank announced its third phase – called GSR3 – which came with the hefty price tag of £3 billion committed to technology investments. Teaming up with Microsoft was part of this billion pound phase, and it seems the closure of 56 more of its physical branches is part of that two.

As the group said itself, the shutdown comes in the wake of the industry’s move towards online banking.

Read next: Lloyds Bank teams with Microsoft to speed up its digital transformation