SoftBank is set to invest $100 million from its second Vision Fund – the first famous for investments in Uber and WeWork – in UK-based artificial intelligence (AI) start-up Behavox.

The AI firm helps banks achieve compliance by monitoring its employees’ behaviour. It is designed to spot instances of internal bribery and rogue trading, two issues many major global banks have been grappling with as of late.

Some major UK banks – most recently Barclays – have begun to roll out monitoring software in a bid to boost productivity, but the technology has led some employees to expose it as an oppressive “Big Brother”-style approach.

Expected to close sometime this week, Behavox’s investment will become the fifth Vision Fund capital injection for a UK firm, ahead of ARM Holdings, Improbable, OakNorth and Greensill. 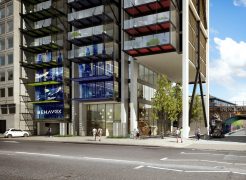 The Japanese conglomerate’s decision to invest in WeWork and Uber the first time around resulted in shareholders losing out as their valuations plummeted in recent months, so now all eyes are on the major investor to back companies with less inflated value and more secure growth plans.

Its choice to back Behavox, which is also backed by Wall Street giant Citi, comes as interest surges in offerings which help financial institutions manage compliance. SoftBank has been in talks with Behavox for a while according to Sky.

Behavox said 2019 saw “record” results for the start-up. Unable to reveal its client list or exact performance metrics, the firms says it bagged some of the world’s biggest banks from North America, Europe and Asia – particularly Japan, last year.

“Reflecting back on what we’ve achieved over the past five years and looking towards the next decade, we couldn’t be more excited,” says founder and CEO Erkin Adylov on the yearly results.

SoftBank is also continuing its investments in Latin America, where it is pouring a further $1 billion into the region this year after its $1.6 billion commitment from 2019. So far the Japanese conglomerate has poured between $100 and $150 million into 17 companies and two venture capital (VC) firms, including AlphaCredit, Rappi, Konfio and Ualá.

Read next: SoftBank to invest further $1bn in LatAm fintech, ecommerce and health care in 2020