Efigence is a Polish digital banking provider much like Backbase. Though far smaller in headcount, it’s much broader in its scope of services – responsible not just for the product, but also for its implementation and its maintenance.

It also focuses on different markets. Whilst Backbase targets the US, Efigence says it now works with 90% of Poland’s biggest banks.

The fintech also has a handful of clients across the United Arab Emirates, Scandinavia, Romania and Germany. Most notably, it created Emirates NBD’s new online banking platform a few years back. 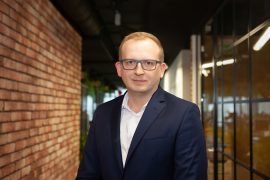 Traditionally incumbent banks have approached IT projects as one-offs. But with the flurry of digital transformations over the last decade, they have been forced to make their budgets and resources more fluid.

Asked what the biggest challenge is for the banks Efigence works with, chief technology officer (CTO) Marek Lesiak tells FinTech Futures: “Banks are working on how to use cloud [technology] instead of a data center, but this is a private cloud rather than Google’s public cloud.”

In the advent of open banking and the Second Payments Directive (PSD2), banks “generally focus on the issue of how to use data”, says Lesiak. That’s because increased regulatory pressures are arguably inhibiting further cloud adoption – a report by LogicWorks said 88% of IT ‘leaders’ in 2019 felt that way.

This attitude is what has led to hybrid cloud solutions – that is, a mixture of public and private – as well as a total denial of the public cloud as an option.

Lesiak says that in light of this, for banks it is still “not the best idea to integrate a third party (TPP) solution on the cloud into the transaction system”.

One of the things Efigence is going to do to help banks is to give its analytics tool an open source licence. Much like Google Analytics, which checks how your web services are performing, but instead deploying it on the cloud, banks can deploy it into their own infrastructures.

“Banks don’t want to invest in infrastructure when they don’t need it,” says Lesiak.

Efigence’s platform is based on application programme interfaces (APIs), and its digital banking deployment takes around three months. EFI4, one of its front-end applications, is a layered solution which is specifically designed for small and medium enterprise (SME) banking services.

The company started out as a communications agency in the sector, but soon found a high demand from banks for user experience (UX) services too.

It is now in negotiations with financial institutions from Kenya, Netherlands, Belgium, Sweden, Norway, Portugal and Brasil to provide those extended services.