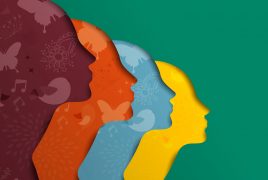 To all of us representation matters

A few weeks ago, I posted a blog about why I avoid talking about gender and prefer representation to panel debates.

I got attacked for my feminism being the wrong type or at least of the wrong intensity. By a woman. A few days later, I was attacked for being a feminist at all. For insinuating things I had not said, suggested or believe in. By a man.

Oh twitter. How you make unnuanced trolls of us all.

But have I learned? Hell no. Here’s another post about gender. You knew it was coming. Not because I will, all of a sudden, start talking about gender non-stop. But because I feel I need to answer the critics. By repeating myself.

I persist. I am annoying that way.

It may have something to do with growing up in a council block, speaking a language irrelevant to global economics and thinking: hell why wouldn’t I go for the big leagues?

Little girls growing up in council blocks tend to be persistent little things. And with some luck, a lot of hard work and the right mother they turn into persistent pains in the proverbial. That’s me.

And as I sit in a tin can, as the song goes, hurtling through the sky, I am forced to share a few very simple observations with you all. Things that shouldn’t need saying at all but after the venomous attacks of the last few weeks I feel I need to say, as the song goes, “four little things”:

Give us a break.

This is recent and we have a long way to go still. And to all of us representation matters. Gender doesn’t make anyone a better hire. Women are there despite and in spite of it. And that matters. Maybe not to each of us. But to all of us as a whole it matters. And to the little girls the world over who are trying to dream themselves into a world that is often not safe and not welcoming. It matters.

Give us a break.

Isn’t that what this is about? So to the women who think my feminism inadequate and choose to attack, I understand. But isn’t this what the fight is for? Freedom to be, in whatever way we choose, without constraint, restraint or obligation to live out someone else’s truth?

How is that about banking, you ask?

Women remain financially illiterate in droves even in western societies. Women overwhelmingly manage household budgets yet have no access to finance in almost every part of the world. Women remain under-represented in the financial services industry. And comparatively underpaid.

Women consume products they don’t get a say in designing.

So it’s time we changed that. All of that.

Whether you deem it enough or not is up to you.

All I want is to get everyone to a place where none of this matters. Not to the men who stand on the right side of history, not to the women who make it despite it all. But to everyone. Irrespective of what they choose to do with it.

Until then, I will look at women like RBS’s Alison Rose and DNB’s Kjerstin Braathen and know gender has nothing to do with it. And it will still do my heart good to know a little girl somewhere is seeing them and, without even thinking, by the mere fact that they are there, she is learning that gender isn’t a consideration when it matters the most: at the beginning of the journey, at the very start of her road.

And no. The R word is not respect. That is lacking. That is owed. But while we fight for the obvious, the R word is representation.

A few weeks ago I went to see Rigoletto (as sexist and of its time as most opera, to be fair). The performance was beautiful and the Oslo opera house where I watched it, spectacular. And as a beautiful evening came to a close, the conductor came on stage for a curtain call. And it was a woman. And in my 41 years of high culture this was the first time I saw a female conductor at a major opera house. And my heart skipped a beat.

Her gender had absolutely nothing to do with her performance. Or how much I had loved it knowing nothing of her gender.

Yet her gender had everything to do with an invitation. And an affirmation of all we can be. And if that doesn’t matter to you, you are either male or we have started doing something right.

Until the moment where it doesn’t matter full stop, I will still count those firsts. Until there is none left to count.