DN Intersect 2019: final round up and key takeaways

This week FinTech Futures attended DN Intersect 2019 in Las Vegas. The conference was predominantly focused on North America, highlighting the need for banks and credit unions to evolve and become digitally-ready as the fintech wave begins to spread throughout the continent.

Diebold Nixdorf, although it sells the physical ATM product, is classed as one of the top ten largest fintechs in the world. Its software uses AI to predict faults before they happen and gather personal information on each ATM user to tailor the customer experience.

Here is a full round-up of the trends and key takeaways mentioned throughout the week:

Parts of the world still use cash

It might come as a shock to many fintech leaders, but North and Latin America are still heavily reliant on cash. This means fintechs approaching these markets will still need to consider cash offerings in their business model.

Particularly in Brazil and Mexico, the unbanked population has been the key to bank branches’ survival, used as the main touchpoint for depositing and withdrawing cash. As DN’s CEO Gerrard Schmid puts it, “they’ve gone from stuffing cash in mattresses to becoming active participants in the finance industry”.

Monzo will need to grow up with its customers, says Forrester

Guest speaker Alyson Clarke from Forrester talked about how US banking institutions can learn from Monzo’s word-of-mouth customer retention, but that the digital bank will need to grow up as its users experience life.

Clarke’s survey-based theory was that life events such as loans, mortgages and family deaths push people to physical banking spaces, which is why she thinks Monzo will need to offer physical services once their customers reach these stages in life. 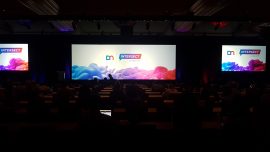 Despite the many reminders that US banks and credit unions are behind and need to catch up with the rest of the world, it still feels like a national movement towards digital from this sector is a fair way off.

Whilst a few bigger financial institutions are beginning to talk about digital, many smaller ones can’t afford a digital transformation and aren’t even thinking about the threats of new digital challenger banks.

Not everyone agreed with the importance of physical

The CEO points out that mobile-based fintech Rocket Mortgage is now the number one originator of mortgage loans in the US, and yet many attendees were still persuaded by Forrester’s data that banks need to invest more in their branches and not in digital.

The US is finally getting onboard with cash recycling

In 2020, DN will be marketing cash recycling services through its new ATM, DN Series. Its software update system will mean banks can switch machines to a recycling setting without needing to rip and replace them.

Small medium-sized enterprises (SMEs) still work with cash, so introducing cash recycling to more banks in the US will mean local business can fill up bank’s ATMs for free and save them money in cash drop offs.

Germany can do it, so why can’t you?

DN’s European head of content marketing, Norbet Knievel and VP of banking marketing, Juergen Kisters, held up Germany as a closer-to-home example for its audience.

“If you look at Germany, you can see that despite the similarities it has with the US financial landscape in terms of its large number of publicly-owned community banks and credit unions, the market there is still mature,” says Kisters.

Bigger US credit unions are starting to mobilise

New cloud-based marketplace Constellation is tapping into some of the bigger US credit unions like TwinStar to provide a more digitally-integrated and personalised financial suite offering.

However, the US still have a major issue with adoption rates. Credit union network Co-op Financial Services’ vice president, Balaji Rangachari, says it’s down to a lack of education and the tedious back-end process many credit unions still have to go through to make a new integration work.

US banks aren’t ready for automation

DN’s vice president of service in the Americas, Chase Andrews, criticised some banks for being “very rigid” in their attitude to AI-automated services.

Andrew’s team can pre-empt ATM malfunctions and fix them before they happen, but banks are still refusing to let DN technicians turn up without knowing about it. Instead, it has to happen through an old ticketing system which is slow and clunky.

Banks are missing a greenfield opportunity with Libra

Libra was called one of “the biggest greenfield opportunities” for banks, despite no banks appearing on the Libra Association list.

Crone Consulting’s CEO finds this “bizarre”, because banks aren’t seeing the opportunity that each withdrawal and deposit through Libra would hold. As ‘foreign transactions’, each one will be attached to a going market 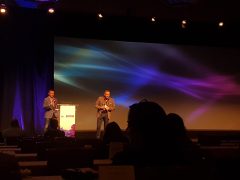 fee of nearly $5, a great money-making channel for banks.

The US need to start the compliance process for APIs

When it comes to the US, the first step DN advises US financial institutions to take is to become compliant. DN’s business development and marketing manager, Scott Anderson, told his audience loud and clearly: “It’s time the US starts paying attention to open banking.”

This is one of the only ways these institutions will be able to be a banking platform for the retailer, consumer and other banks, says Anderson.