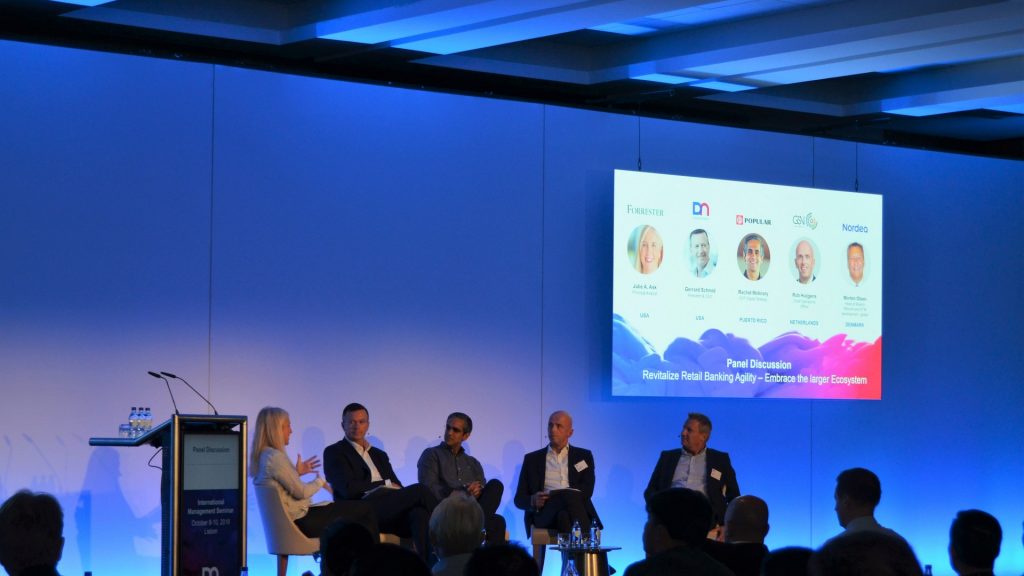 How do retail banks stay relevant to their customers’ changing demands and priorities? Digitisation isn’t the only answer but opens up many of the solutions, delegates at Diebold Nixdorf’s IMS event in Lisbon were told.

What are the features of the new world of retail banking? They range from full digitised branches where the focus is moving from transactions and more on building customer relationships to tech-laden trucks taking services to the growing number of areas no longer served by a bank branch.

Both models were outlined at Diebold Nixdorf’s 31st International Management Seminar (IMS), held this week in Lisbon, which this year had as its overall theme “Revitalise Retail Banking Agility – Embrace the Larger Ecosystem”. The group’s chief marketing officer Devon Watson identified four big main drivers transforming retail banking: these were increasing competition, the industry’s shifting cost basis, consumer evolution and changes in consumer behaviour – some more obvious than others, and the unbundling that in Europe is being led by the revised Payment Services Directive aka PSD2.

In an audience poll, delegates were asked to select what they regarded as the trend currently impacting most on the industry from five options. The responses were:

The message delivered over the event’s two days that banks must remain relevant to today’s consumers, plus regular references to “the customer journey”, evidently persuaded delegates the percentage who agreed that frictionless customer journeys mattered most had risen from 25% to 61%.

“Digitisation alone isn’t enough,” said Watson. “We have to change the way in which we provide services to the customer.

“Consumer journeys have been a focus for many years and the approach is no longer new but still important in areas such as pre-staged mobile cash, automated and assisted services and digital onboarding of customers. We now need to talk on how we move beyond these to the next stage.”

He cited Amazon as a group that had perfected the art of owning the entire consumer journey by delivering a “seamless experience” across the entire commerce value chain. 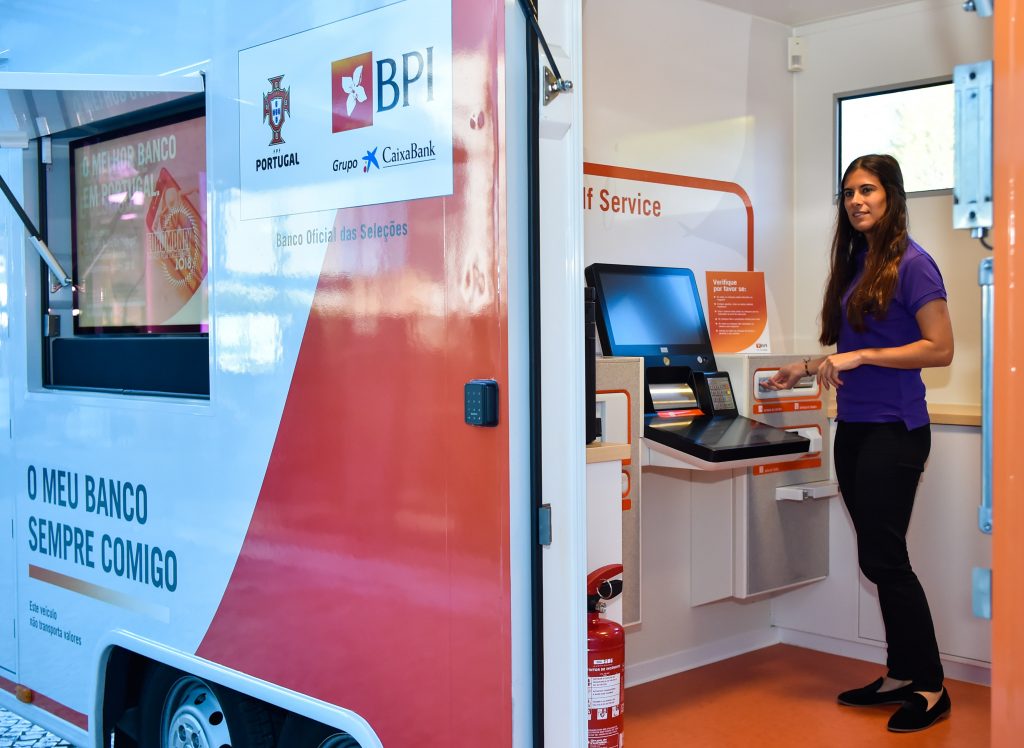 The speed of digital transformation varies from country to country. A series of case studies from around the world provided IMS delegates with progress reports on the various approaches to digitisation adopted by individual banks and their progress to date.

For Portugal’s Banco BPI, which is part of Spain’s Grupo CaixaBank and has 1.75 million customers and 505 commercial branches, various branch models to address differing needs are being used now that BPI has fully automated all teller transactions and digitised all business processes. Over 90% of transactions are now self-serviced, with cash deposits the only activity to yet be fully converted.

Like many its peers BPI recognises the need to be agile, said executive director Francisco Manuel Barbeira. This means the ability to “fail fast” by trialling new formats for serving customers and pursuing the ones that are well received. Most recently, BPI has launched mobile branches – tech-equipped vans to serve towns where a traditional bricks-and-mortar branch has closed, regions where establishing a traditional branch is not economic, and for special events.

New branch formats are also being trialled by Canada’s Scotiabank, which has 9.4 million customers of whom only 35% are “digitally active”, said Pouria Tehrani, director for the bank’s physical footprint strategy and development. Admitting that the bank had previously lagged its competitors he said that Scotiabank is now “adopting a digital-first mind-set” and working closely with Tangerine – formerly ING Direct and Canada’s biggest digital bank.

While the aim is to deliver a “one-bank experience” that offers consistency across all of its different channels, new formats introduced in recent years include Scotiabank Express and Scotiabank Solutions, both of which offer a bespoke service based on digital tools and staff able to provide a personalised service.

In the Middle East, the front-end customer experience has been transformed over the past couple of years despite the region’s continuing attachment to cash and cheques, said André Duarte, associate VP for self-service banking and branch transformation at Emirates NBD. The bank’s initiatives include the May 2017 launch of Liv, a lifestyle digital bank aimed at millennials.

ATM banking remains the bank’s most popular channel, used by 78% of its customers, but Emirates NBD sees its branches becoming increasingly advisory and sales-focused. Features include interactive tellers, an assisted service via real life video interaction and the use of Pepper, the humanoid robot developed by SoftBank Robotics as a “branch meeter, greeter and ambassador”. The bank is also partnering with Diebold to “reinvent” assisted service with EasyHub, an integrated digital kiosk that operates as a full branch. 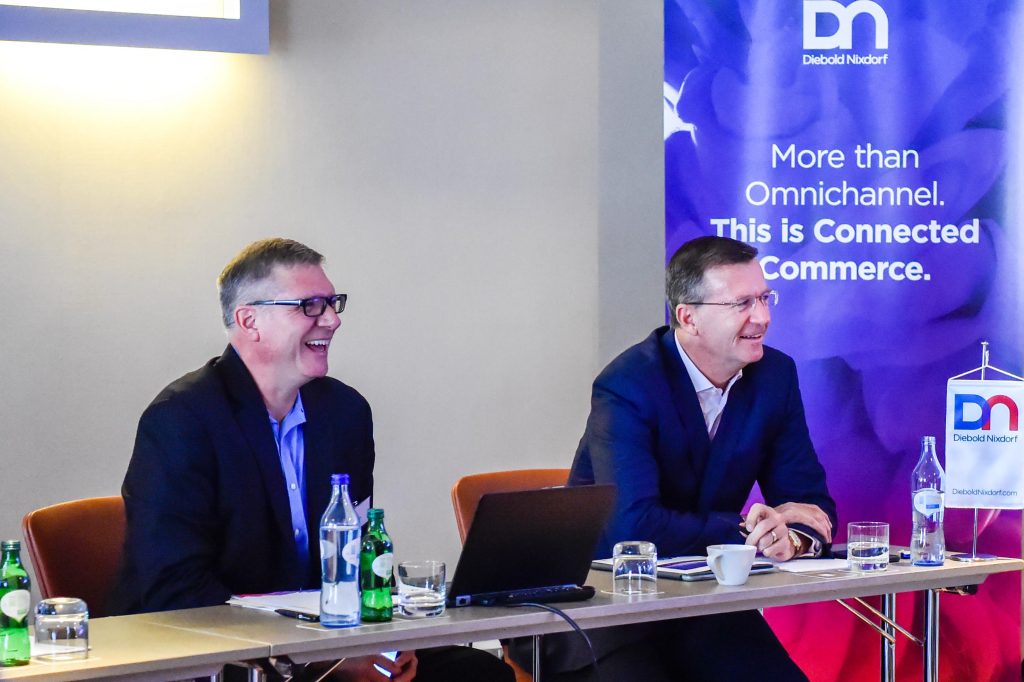 While the cashless society remains some years away in many parts of the world, the use of cash is steadily declining across Scandinavian countries, even for small payments. In Sweden, the trend has accelerated since 2012 with the introduction by six of the country’s main banks and the Swedish central bank of the Swish mobile payment system.

This development caused banks to review their ATM machine infrastructure, which was ageing and in need of an upgrade, said Johan Alvinger, product director for Bankomat. The company, incorporated in 2010, is owned by Swedbank, Handelsbanken, SEB, Nordea and Danske Bank, each of which has a 20% holding and has acquired six new customers.

Pooling was the solution to maintaining Sweden’s ATM infrastructure. Bankomat took over a national network of 3,800 ATMs, reduced the number by 1,000 and has relocated many from bank branches to shopping malls. “We constantly re-evaluate which ATMs to retain and which to remove,” said Alvinger. “Changes in consumer behaviour have meant fewer ATM transactions, but larger amounts withdrawn per transaction.

Bankomat’s ATMs offer a standardised set of services that include withdrawals, foreign currency, deposits, balance enquiries, PIN management and account-to-account transfer (Sweden dispensed with cheques in the 1990s). “We offer one standard contract with no exceptions, one standardised transaction fee per service and one standard interface covering all services, but with distinct branding for each of our 11 bank customers,” said Alvinger. 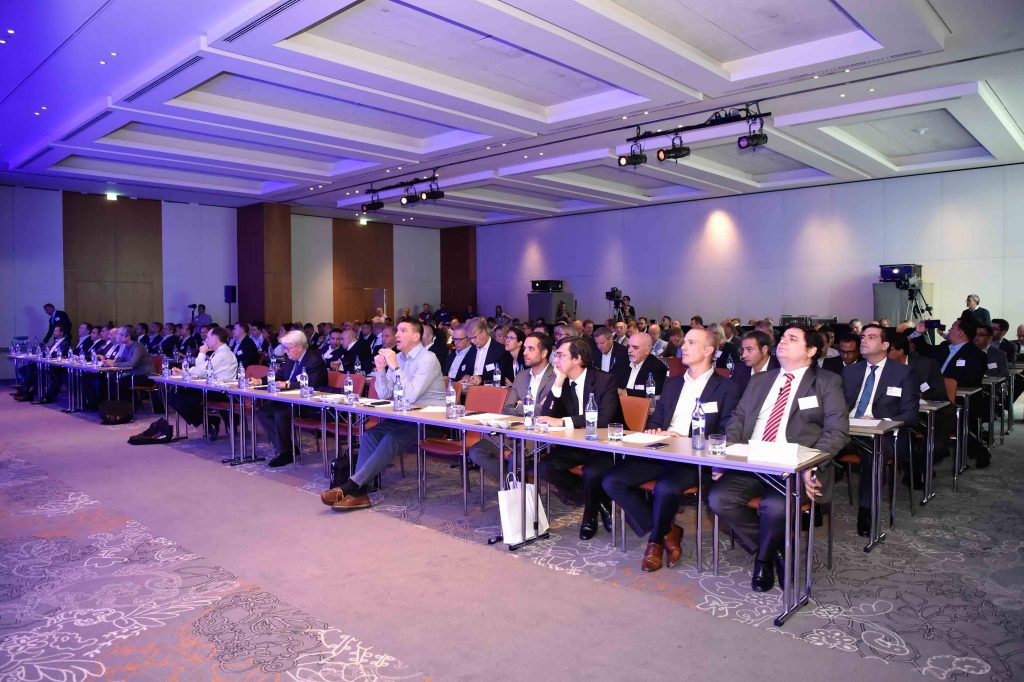 This year’s IMS was an opportunity for Diebold’s new president and chief executive, Gerrard Schmid, who joined in February and previously headed D+H Corp until its merger with Misys, to provide reassurance on the group’s future. As the world’s biggest producer of ATMs and also a provider of end-to-end services for both the banking and retail sectors, it is strongly positioned with annual revenues of $4.5 billion and a workforce of 123,000 that includes a 15,000-strong global service team.

However, sales of its hardware have dipped in Asia, where extreme competition and price cutting have made some business not worth pursuing. More seriously the group’s share price, already in steady decline, dropped sharply in August after a net loss of $138 million was reported for the second quarter while later that month a $650m capital commitment was secured from two lenders.

Schmid admitted that his first seven months in the CEO chair had been a “roller coaster ride”, but said the group’s fundraising was necessitated when what had been a long-term minority shareholder obligation suddenly became an immediate one. Diebold was now in a better place operationally and Q3 results would show an improvement.

The new CEO is also confident that even in Scandinavia, where progress towards the cashless society is particularly marked, notes and coins aren’t going to disappear just yet. “Look at it on a country-to-country basis,” he suggested. “In Mexico, which still has a huge unbanked population, ATM transactions are growing by 20% per years and countries such as Singapore are still highly cash-intensive.

“Indeed the global cash supply is actually still growing and smaller businesses are still heavily reliant on cash. So it will continue to be around for a long time.”