Like a weary pugilist reeling from a canny combo, Barclays has been left battered and bruised in the latest figures for the UK’s Current Account Switch Service (CASS).

Where did our love go?

But while some may suffer, and wail and gnash their teeth, others can prosper and adopt a facial expression similar to a smug-looking ITV celebrity hosting a mediocre game show.

Bacs, which is responsible for CASS, says: “During Q1 2018, Halifax was the biggest gainer [33,942], closely followed by Nationwide [28,763] and HSBC [20,885], which have all continued to provide competitive offerings. The figures for Q1 2018 also sees data included for the new challenger bank Starling, which has already experienced significant net gains.”

In fact, Starling got an extra 1,153 accounts. Significant?

Anyway, semantic stroppiness aside, the latest figures show that over 4.9 million switches have taken place since the service launched in 2013.

With more stats to serve than a crazed mathematician, CASS adds that over 57 million payments have now been redirected by the service, which reports a seven day switching success rate of 98.7%.

In addition to this, 94% of those surveyed during Q2 2018, who have switched their current account in the last three years, said that they were satisfied with the process.

Q1 2018 data is below. Full details are available here. 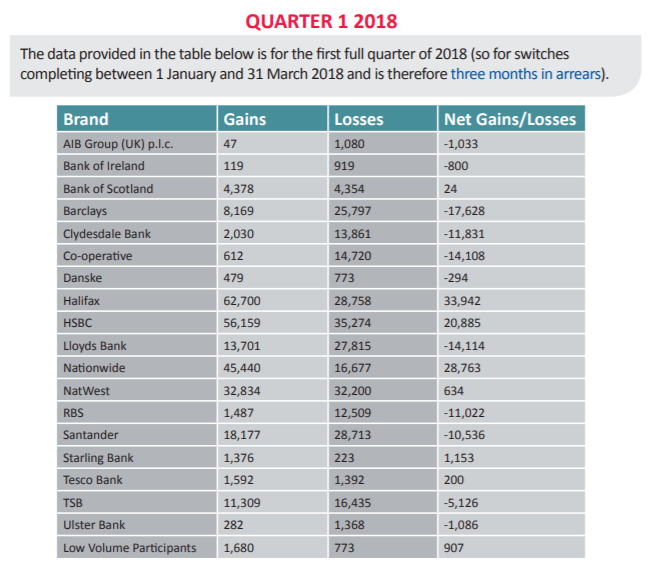