New regulation and technology are driving business transformation among the City of London’s traditional financial services firms. Closer ties with Manchester’s burgeoning fintech community could help them rise to the challenge.

In a pivotal year for new regulation, the UK’s traditional financial services firms face the challenge of adapting to competition and change.

New rules on open banking – designed to make banks share data with other companies to improve consumer choice and experience – are among the hurdles City of London firms must overcome as they keep pace with consumer appetite for new apps and payment methods. On top of that is the uncertainty of Brexit and competition for technology talent.

The challenge is partly down to the sheer scale of so many of the UK’s traditional financial institutions, which lack the agility to respond quickly to changes in legislation and consumer behaviour.

The need to be nimble has been noted and heavyweight financial institutions are beginning to see the benefits of working in partnership with more agile fintech firms capable of plugging the gap with new apps and payment options.

This presents major opportunities for the burgeoning fintech community in Manchester, where a nurturing ecosystem, combined with lower costs and a pipeline of graduate software engineers from four universities, is proving increasingly attractive to established financial services firms.

A breakfast meeting in the historic heart of the City of London recently began the process of establishing more formal links between Manchester fintechs and London. It was an opportunity to discuss legislation and technology, opportunities and challenges. 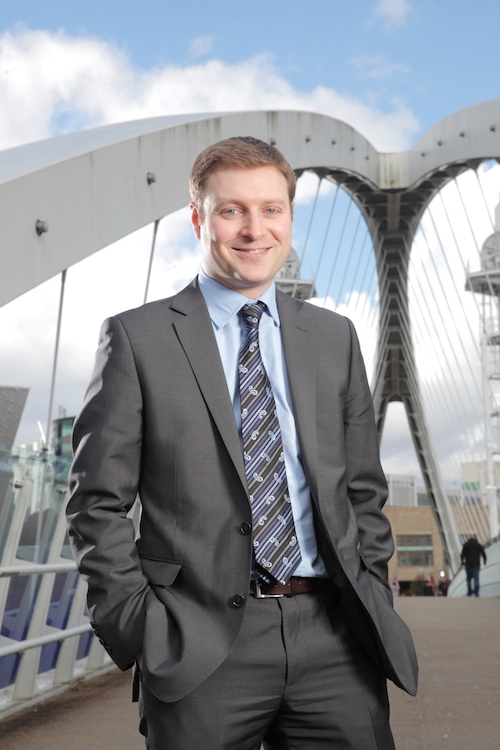 Co-hosted by Tim Newns, chief executive of Midas, Manchester’s inward investment agency, and Catherine McGuinness, policy chairwoman of the City of London Corporation, the event brought together fintech firms big and small from both cities.

Sitting around the polished wood boardroom table as the sun rose over the Square Mile were representatives of Deutsche Bank, and Deloitte, and a clutch of fintech firms.

They included Manchester-based AccessPay, a payments and cash management automation platform for corporates; MarketInvoice, the peer-to-peer (P2P) invoice discounter headquartered in London with a base in Manchester; ComplyAdvantage, a London-based start-up which hopes to help financiers to improve due diligence; and Onfido, which hopes to make identity verification as easy as taking a selfie.

That’s why companies like AccessPay have forged success innovating on behalf of the major corporations, while major corporations are demonstrating their desire to work more closely with fintech firms by opening the architecture of their software systems to third party developers through open API initiatives.

The City of London is home to many of the world’s largest financial firms but this meeting of minds acknowledged the strength of the UK’s fintech sector lies in collaboration with other cities.

“The UK is the unparalleled leader when it comes to fintech, employing more people in this sector than New York alone and Singapore, Hong Kong and Australia combined,” said Catherine McGuinness. “This growth has undoubtedly been bolstered by the major tech hubs across the UK – including Manchester – which are setting the FinTech agenda in this global marketplace.

“Financial firms are increasingly turning to technology to better serve their customers, which highlights just how important it is for the financial sector to bridge the gap between London and the UK’s major fintech hubs.

“We are pleased to be working with Manchester and Midas to explore how we can work more closely together in the future.”

Although London is the established and largest financial and professional services (FPS) centre in the UK, two thirds of FPS employment is outside London and Manchester has a well-established and growing FPS sector. The City of London Corporation event provided an opportunity to highlight successes in the region while exemplifying the complementary relationship between partners of different scale.

Greater Manchester has enjoyed significant growth in its financial services sector – 70,000 new jobs in the last decade through investment from the likes of WorldPay – and fintech provides further opportunities.

That success is down to both history and a carefully conceived ecosystem. The convergence in Manchester of the traditional technology, media and finance industries provided fertile soil for FinTech.

Manchester is the e-commerce centre of Europe, providing the insight and skills that are a key component of the customer experience and payment requirements of financial services.

That isn’t lost on larger banks and financial services firms, the Midas chief executive explains. He says that he has recently spoken to three major companies interested in space where they might co-locate alongside more agile fintech developers.

Forming partnerships with fintech service providers and other SMEs helps banks service customers in better and more innovative ways, while universities are a key part of this ecosystem, not only as a source of talent but also as places which encourage collaboration between industry and academia around research projects. Ready access to capital is another factor.

A wealth of companies are taking advantage of what Manchester has to offer. Delivering frictionless payments across online, mobile and in-store, Adyen’s customers include Facebook, eBay, Uber, Netflix, Spotify and L’Oreal. It is based in the XYZ building in Spinningfields.

Newns added: “Manchester is the largest employer of financial services outside London – it represents 20% of the economy. The FPS sector doesn’t just exist in London. The vital role it plays in the UK economy is echoed in Manchester.

“We know that there are some major challenges in the banking industry, with changes in consumer habits, the move to become digital entities rather than financial institutions – digital entities that undertake financial activity. The major banks have challenges around the legacy of agility, with their scale. The challenger banks have issues with their lack of scale – how they get into the market and draw customers in. Then there are the mid-sized banks which are very well placed to take advantage of that, with agility and a customer base, but with enough capital behind them to invest in digital technologies. Manchester’s fintech community can provide answers to those challenges.”

Part of this ecosystem is the array of fintech/digital hubs across Greater Manchester, from commercial accelerators to co-working spaces, providing a base where start-ups, SMEs and larger firms can collaborate and flourish.

The Vault is a new fintech digital workspace within the XYZ building in Manchester’s financial services district – Spinningfields; Rise Manchester is an entrepreneurial hub run by Barclays aimed at inspiring and nurturing tech entrepreneurs and start-ups; NatWest has just announced that their Manchester eSpark location has been chosen as one of the sites to run its fintech accelerator programme.

There is proof-of-concept (PoC) for the co-operative approach too. Many of the larger and more established financial services firms now acknowledge the benefit of working with smaller developers who are more fleet of foot.

Many are opening their technology architecture to support external developers in producing new apps and services for their clients.

They acknowledge, due to their scale, legacy and history, that they don’t have all the answers, or the agility, to create those answers quick enough.

Alistair Davies, director, location strategy with Deloitte, says it is with good reason that financial services institutions are increasingly interesting in having additional bases beyond London.

“London is a very important centre, with one of deepest and most varied talent pools around the world,” Davies says. “Whereas in regional locations, labour costs may be 25% cheaper, real estate may be half the price, but there’s clearly some tension along the way about companies achieving a happy medium and quite often having a multi-site footprint provides a useful and effective balance in terms of locations.”

Why do fintech companies choose Manchester?

AccessPay is a prime example of a Manchester-based FinTech start-up which has been able to enhance the capabilities of the traditional financial sector businesses it counts as clients.

It enables financial institutions to do things which are commonplace in consumer banking but still beyond the capabilities of those in the corporate sector.

“We believe that the banking experience for corporates is broken,” says product director James Higgins. “It’s inadequate. We’ve come a long way from a retail or consumer perspective, where you can do all of your banking on your smartphone or your tablet these days. That experience has not translated to the corporate customer. Our guiding premise is that we can do it much better and we can do it faster than the incumbent providers, with some of the challenges that they face. We feel that we are in a good spot at the moment because of this perfect storm of legislation and appetite from our customer base to use new technologies and the availability of those technologies.”

Higgins says that AccessPay has drawn on a Manchester talent base with no preconceptions about how payments and cash transfer should be done.

He adds: “The main reason we have been so successful is up in Manchester we have this fantastic ecosystem, and we’ve had to draw on that to get going as a business. We are challenging the incumbent providers to do things better, but we recognise that we are a technology provider. We don’t want to provide accounts, we don’t want to hold people’s money, that is the role of the bank. We want to assist their customer to have a better experience but also we want to assist the providers, to offer new products at a rate of knots, which probably they couldn’t do because they are held back by overheads, servicing regulatory change, overhauling legacy architecture. We are happy to provide these services to the banks customers in whatever form of partnership model the banks want.

Paolo Giabardo, UK managing director, Ebury, added: “Ebury is an organisation with a can-do attitude, where it’s possible to be dynamic and make things happen quickly and successfully. Opening an office in Manchester allows us to recruit from a pool of graduate talent eager to contribute to the success of Ebury, and be closer to our client base outside of our London headquarters.”

Phillip Nunn, CEO of Manchester-based Wealthchain, added: ““The Manchester business community has grown over the past ten years with the arrival of many innovative start-up companies. This city has one of the largest student populations in Europe, employers like us could really benefit from the talent grown in the North.

“Thanks to technology, the financial services no longer need to be constrained to London, we can connect with clients and investors all over the world.”

Want to know more about fintech outside London? Download our free report here.