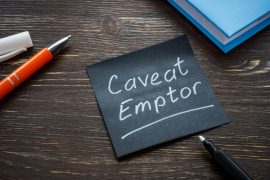 Give praise where it’s deserved. And don’t add conditions.

A nifty little way of saying that commercial law is not on your side, Mr Consumer, and unless whatever you are buying comes with an express warranty in your contract, you are on your own if it doesn’t work out as you thought it might.

That’s what caveats are all about, aren’t they?

And that is what I want to talk about today.

The caveats that come with company culture and the caveat emptor that makes them your problem even if they are not your fault.

And specifically, the caveats that come with how your culture handles feedback and praise.

“A perfect ten is for God” was a very common line from teachers at my school when I was growing up, and I have heard just as many industry bosses say they don’t give out praise because they have high standards and nothing is quite good enough.

They mean it though.

You hear them at town halls and company announcements, interviews and panels giving faint praise with caveats galore. They read somewhere that praise is good for morale so they thank people for their efforts.

There is always a but.

Stated or implied, it’s always there.

Thank you for your efforts, but we didn’t go as far as we could have done. But. We are not quite done yet. But. There is more work.

Well done. But not all that well, to be fair, you could and should have done better. You will need to do more. The latter unspoken but louder than anything actually said.

I have been summoned to Mahogany Row twice in my career to be given a telling off for praising juniors publicly. On one occasion I was told by my boss’ boss that praising a junior’s work and acknowledging he had actually done it made me look weak. Oh yes.

On another occasion I was told off because the team member I praised was a highly inconsistent performer. She had indeed done a great job that day but didn’t always do a good job so what was I telling her? That inconsistency is good? No genius. That the work on this occasion was good. That she was capable of ‘good’.

So don’t caveat it. Don’t be stingy. Say it where it’s deserved. It means a lot. Not just for morale. Also for navigation. Publicly acknowledging what good looks like helps people manage their own behaviour and align to the values of the organisation, the behaviours and outcomes you actually want to see.

So give praise where it’s deserved. Give it publicly, give it as often as it is earned. And don’t add conditions. Well done. End of sentence. No caveats. Your team knows they have more work to do. They weren’t packing up and leaving the office quite yet.

Giving praise seems to come so unnaturally to so many people in our industry. And sadly, so is giving feedback. Because the equally ugly twin brother of faint praise is vague criticism.

I love me some real-time feedback.

As real time as it comes.

“Let me stop you right there” levels of real time or, if that’s a bridge too far, as soon as a conversation is over. When it is fresh in everyone’s mind and your feedback can be specific, actionable and constructive. The longer you leave it, the higher the likelihood of the person at the receiving end of the feedback taking it out of context, taking it to heart more than necessary, taking it as a flaw rather than something to work on.

Imagine team members mishandling a meeting. You can see it happening but you can’t jump in and tell them right there and then as there are clients in the room. So you tell them after the fact. And what you say is along the lines of:

“You were a little defensive in that conversation right there, totally get why but you don’t need to be, just move on to the next topic,” or “You went into too much detail too fast and I don’t think these guys were with us. You should pause, ask questions, check that your audience is engaged, that’s why I stepped in.”

Imagine delivering this feedback straight after a meeting vs three months later.

The feedback is the same.

Based on one specific incident but applicable to many, triggered by one event but generalisable.

If you give the feedback straight after the meeting, the person you are speaking to is likely to go “Yeah I get that, I was blind-sided,” or “Good point, I should have asked some questions to see what is of interest to the client in the room, will do next time.”

From a standing start and seemingly out of the blue. At a performance review or other seminal event, usually bunched with other similar bits of feedback.

The person you are speaking to may not remember the circumstances of the incident so you will find yourself in a discussion about intentions, extenuating circumstances and excuses. They will feel like the criticism is about their work writ large and it will be heard in the context of other events, including losing the business (so are they responsible?) or winning the business (so is this even relevant?). You let time pass between the event and the feedback and none of it is about what it’s about anymore.

Give the feedback immediately.

And let’s face it. Most of that feedback is actionable, specific and fairly small if you give it often.

But not all of it.

Some of the feedback is hard to give and even harder to hear. I have had to stop people mid-sentence and say to them that in our team we do not speak of colleagues behind their backs, we don’t blame and we don’t backstab. I have had to pull up people on lies. On behaviour that may not have been intended as bullying but left more than one colleague crying in a bathroom. Not good. Whatever it is you thought you were going for there, you failed.

As a manager I am among other things the guardian of a culture so I need to do something about bad behaviour.

And the first step is feedback, to give people the opportunity to do better. If they don’t, more drastic steps are necessary.

If the behaviour doesn’t change, action has to be taken because what you tolerate defines your culture.

Because nobody cares about the excuses and the extenuating circumstances management may see.

What people in the trenches see is some colleagues getting away with murder, not the reasons why on that one occasion it was actually manslaughter.

What lesson are you giving your organisation when you don’t give actionable feedback? You don’t give people who want to do better the option to do just that and you give everyone the impression that you tolerate bad behaviour or poor performance. Or that you don’t know the difference.

In the context of organisations where bad behaviour has rarely stood in the way of promotion and career progression and taking initiative can and has blown up in people’s faces, a culture of active feedback, consequences for bad behaviour and recognition – material as well as in the form of praise – are absolutely key to driving transformation. Because together they sign-post the message of what sort of place this is.

Because let’s face it.

In a culture where bad behaviour is tolerated, where recognition is lukewarm and castigation rare, giving it your all seems rather silly as choices go.

Engaging in passive aggressive mediocrity emerges as a low-risk, high-reward strategy. It is almost crazy that some people still take it upon themselves to do the right thing in those cultures if you think about it.

Is being a bit of an idiot viable in your culture?

Is it a low-risk strategy because chances are you will survive?

Is it a high-reward strategy because you do what you wish with little to no consideration for others and no consequence?

Don’t answer. You don’t need to. Just know that as a consumer of this culture the problem is now yours. It wasn’t of your making, perhaps, and you didn’t realise that is what you were getting when you signed your contract, but there you are. It is now your problem, buyer beware.

You have two choices, and one is to indulge in caveats. The other, you got it, is to change it. Starting with direct, actionable, in-time feedback and regular, vocal, open praise.

You didn’t cause this but here we are. This culture, so widespread as to be a norm across our industry, is now your problem.