Tech giant Apple has announced plans to allow US merchants to use their iPhone to accept contactless payments. 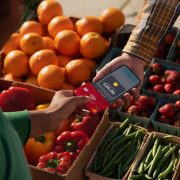 Apple says Tap to Pay will be “secure, private, and easy” for merchants to use

Merchants wishing to use an iPhone as a payment terminal will need to download a corresponding partner-enabled iOS app on an iPhone XS model or later device.

Stripe will be the first paytech to offer Tap to Pay on iPhone to their business customers in the spring. Apple says additional payment platforms and apps will follow later this year.

“Whether you’re a salesperson at an internet-first retailer or an individual entrepreneur, you can soon accept contactless payments on a device that’s already in your pocket: your iPhone,” says Stripe chief business officer Billy Alvarado.

Apple’s vice president of Apple Pay and Apple Wallet Jennifer Bailey says in a world where consumers increasingly expect the contactless option, “Tap to Pay on iPhone will provide businesses with a secure, private, and easy way to accept contactless payments”.

The world’s most valuable company says privacy has been “fundamental” in developing Tap to Pay.

All transactions are encrypted and processed using the Secure Element, a chip that acts as a ‘vault’ and protects payments from unauthorised access.

In October last year, researchers discovered an exploit on iPhones where large unauthorised contactless payments could be made via its integration with Visa.

Apple says Tap to Pay will be available to payment platforms and app developers to use in their software developer kits (SDKs) in an upcoming iOS software beta.