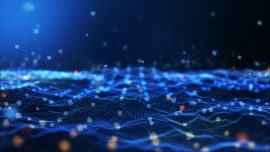 The future of money is exciting, but could become dystopian without proper regulation

I have been lucky to have been part of the conversation more than once, over the years. And we have never pulled our punches.

The team at Innotribe always made sure of that.

We have never not gone to the boundaries of the question and asked the hard, unspoken parts of ‘what next?’ And it is never enough. Because year on year that frontier is moving. Faster than you would expect. Faster than should be possible. And yet here we are and here it is and that is why, year after year, we get together as an industry and pause to take stock on the big questions that are often moving faster than us.

Gone is the discussion about what banks should do next.

About whether the future is cashless.

About how to regulate digital assets and smart securities.

Not because they were not a thing.

Not even because we have solved all these challenges, as an industry.

But because change waits for no man, woman or bank.

The world is moving fast, and just as we were wrapping our heads around each of these questions, the next one popped up with implications more sweeping than the first.

Just as we were wrapping our head around digital transactions and digital assets, the next logical thing appeared. And now we are facing into central bank-backed digital currencies.

Last year, we spent a lot of our time at Sibos speaking to regulators and central bank representatives from around the world around what CBDCs meant. What they were for. What is the art of the possible.

And a lot of caveats were offered.

But not so fast.

I even wrote a piece last year, ‘Central bank digital currencies – don’t get the popcorn’, because the focus was on what is technically possible, what proofs of concept are in flight and why their aims are modest and what this can achieve for the payments industry, which, frankly, is already over-serviced and the tech is faster and better than the human processes using the tech. So until the humans catch up with their tools, more tech won’t move the needle.

And the rest sounded a bit underwhelming in terms of what was about to happen. No car chases, no explosions.

And frankly, I am yet to be persuaded that the next chapter or two of CBDCs is… exciting.

I just don’t see it.

But the future? The stuff that comes after the boring bits?

That’s riveting and exciting and downright scary, and what the Future of Money is about this year.

That’s plumbing, that’s mechanistic. For as long as we need to exchange items of value for goods and services there will be ways that allow us to do that.

But what we exchange for goods and services and who is involved in the process is a different story.

And for once, I am not going to focus on the banks and the bankers – have no fear, I will be back onto that very soon. I am way too fascinated by what we exchange.

And you know what that means?

That means it will be possible for the issuer of the programmable currency to make it impossible to spend in certain ways. In certain industries. In certain countries.

Why would anyone do that?

Because the vast majority of regimes are illiberal.

Because even liberal regimes have short-term goals that need to be met and the means sometimes feel, rightly or wrongly, sanctified by the aims.

Because the vast majority of experiments start small. And by the time they get big they have made a lot of foundational assumptions and set things in motion and created precedents.

Because the vast majority of regulators look at the piece of the world they have been assigned to police and protect and regulate and they don’t feel they can or should take on the world. Take on ethics. And moral imperatives of freedom and individual self-determination.

Because the road to hell is paved with good intentions, that’s why.

Because, as Anton Chekhov put it, if there is a gun on stage in the first act, someone will use it by the third act.

How do we do that?

But where do you begin?

Frankly, at the beginning.

Understanding the art of the possible, not in a thousand-foot view, but really, really understanding what we are dealing with here.

Go deep. Go dark. How bad could it get?

For every dark and sinister transaction that is now forced into the light, how many things will now be policed and subject to the whims of a variety of regimes that may have views on what is good for you?

Let’s face it, humans are not exactly in agreement as to what the right way to live is. From religious extremism to the deep divisions inside democratic societies, there is more polarisation in recent years than ever before in times of peace and, I bet you, our view of what is ethical and who is allowed to opine on it will differ dramatically depending on who we ask.

And the scariest thing is we are not even asking.

The industry is evolving. Baby steps are adding up to a lot of distance travelled. Techies are pushing the boundaries of learning. Central bankers are dealing with the next problem in front of them.

None of them are ethical philosophers and, frankly, as central banks came to life originally to fund wars, I am not sure the pedigree is what I am after here. No offence to good people doing good work the world over.

All I am saying is: the future of money is exciting. It’s digital and it’s programmable and it’s radically different to what we have hitherto known. But there is a very real sense in which the future of money could be highly dystopian. Scary. Constricting. A vehicle of power in ways much deeper and much more insidious than wealth has served power up until now.

Maybe there is time to act with intent and deliberation and craft a new path.

That’s what the future of money debate will be all about.