Monet Money, a Notting Hill-based cash management app hoping to tap the UK’s creatives, has launched a waitlist for its prototype. 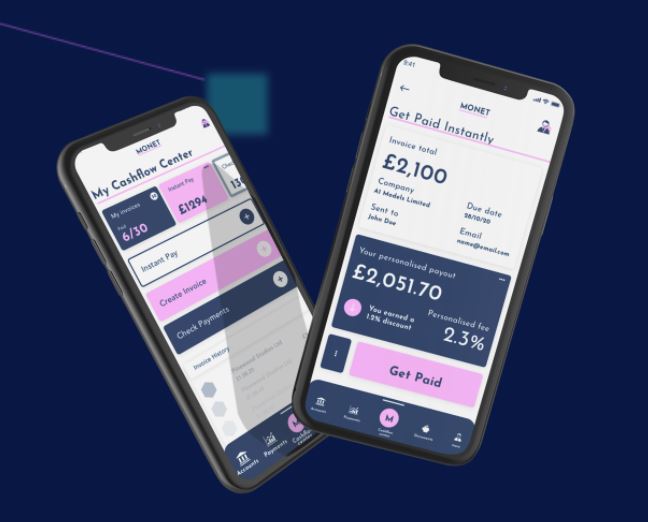 The fintech has landed £60,000 in pre-seed funding so far

The beta version of its app is expected to land in February 2021, Fintech Direct reports.

The start-up promises to process invoices submitted via the app by freelancers and small businesses within 24 hours.

“We’ll do the hard work in waiting for brands to pay,” the fintech says on its website. It adds that a free invoice creation tool is also integrated in the app.

Despite promising a 24-hour turnaround, businesses still only have to pay invoices in the industry-standard 30-60-day time frames.

Monet said back in July via a blog post that it would take a service fee between 1-3%. Whilst it’s still unclear how this fee slider works, it’ll likely change depending on how big the invoice is.

The start-up tells Fintech Direct that it has landed 6,000 pre-registered businesses and sole traders to date.

It’s also landed £60,000 in pre-seed funding so far, excluding additional undisclosed grants from the Isle of Man Department for Enterprise.

The arts world – both big and small – has emerged as one of the hardest-hit industries during the COVID-19 pandemic.

At the beginning of this month, major UK cinema chain Cineworld temporarily ceased operations. Cineworld revealed the closures are set to impact approximately 45,000 employees, including 5,500 jobs in the UK, according to BBC News.

The chief executive of UK Theatre, Julian Bird, revealed statistics on the national picture. He said earlier this year that 53% of venues had cash flow problems, whilst a further 30% expected to have these problems as late as the end of the 2021 financial year next April.

Due to the strains put on the arts sector during the pandemic, the UK government unveiled a £1.57 billion Culture Recovery Fund (CRF). The Arts Council England announced that 1,385 UK arts organisations and venues will receive portions of a  £257 million grant to help them survive over the next six months.

A problem before COVID-19

But even before the pandemic, a 2018 report by Nexus revealed that demand for repayable finance in the arts would reach heights of £309 million by 2023.

Repayable finance, which is another phrase for borrowed money, is often used by art organisations to foot immediate cash flow.

This means a solution like Monet’s, which gives those in the art’s business faster access to their cash, is timely.

And looking beyond the arts, small businesses en masse struggle with their cash flow. As many find they’re spending valuable time on chasing payments.

Nearly one in five (18%) of Europe’s small and medium-sized enterprises (SMEs) say that late payments threaten the survival of their business. That’s according to Intrum’s 2019 European Payment Report.