PeasyPay, a start-up spun out of pan-European ecosystem EIT Digital, continues to launch its hand and facial recognition technology across Europe.

The start-up,founded in Hungary, first rolled out the technology in a Hungarian coffee shop in December 2019.

After a break due to COVID-19 the firm has rebooted its rollout. Currently, the technology is piloting in Guadalajara, Spain. Slovenia and the UK are soon to follow. 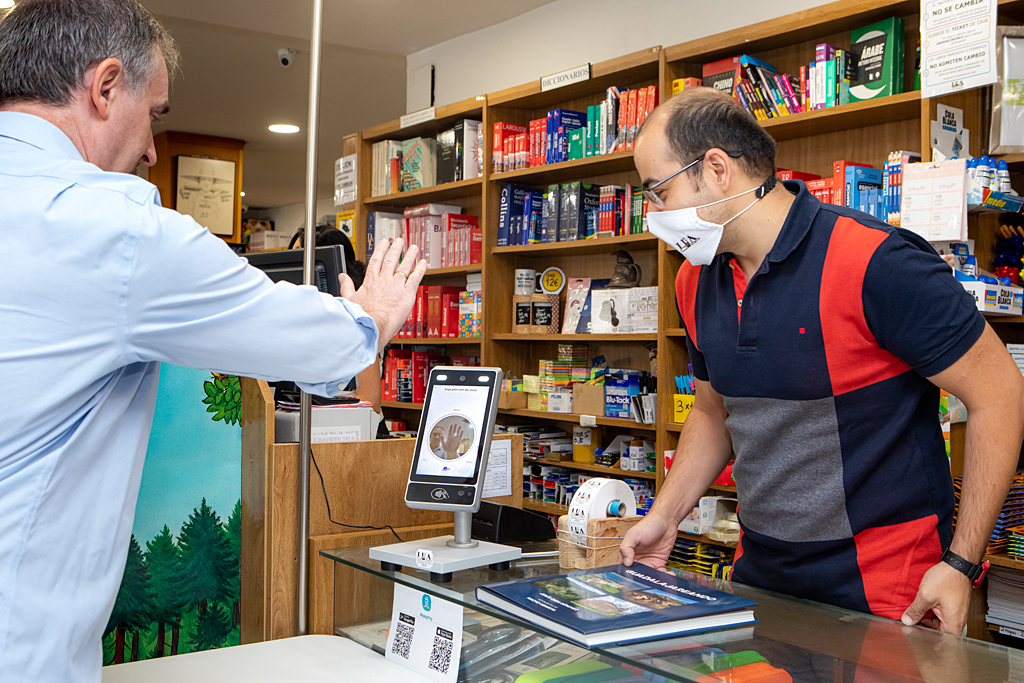 In the UK, the start-up is working with taxi drivers in Glasgow

Taking a picture of the palm of a consumer’s hand and capturing their face, the technology allows them to pay without a wallet, smartphone or credit card.

“Pay with a Smile”

EIT Digital launched PeasyPay through its Innovation Factory, which houses 12-month projects and holds them up with a co-investment.

Other products of the Innovation Factory include Ingenico’s Voice Commerce solution, which partnered with start-ups Copsonic and ValidSoft, as well as Deal Shopper – a discount voucher platform created by old generation fintech E-Group alongside OTP Bank and SIA.

Codenamed “Pay with a Smile”, PeasyPay is the co-creation of five companies. These include Spanish fintech Ci3 and Liberbank, Hungary’s E-Group and OTP Bank, as well as Slovenia’s AV Living Lab – a firm which works on autonomous vehicles.

E-Group and OTP Bank partnered with PeasyPay to spread the payment method further across Hungary.

In Spain, the start-up is targeting Guadalajara’s food, retail and hospitality industries. In total, around 25 shops – bakeries, butcher’s shops, grocery stores, and bookstores – are participating in the Spanish pilot.

The venture has its eyes on department stores next.

In the UK, the start-up is working with taxi drivers so they can more easily pay the fee to enter Glasgow Airport’s parking area. In Slovenia, the pilot will focus on restaurants.

The app stores digital profiles of customers’ palms and faces. Customers take a selfie and a picture of their palm via the consumer app, after which they register their bank card details via a payment gateway.

Consent of the consumer is important. Under the genera data protection regulation (GDPR), biometric information cannot be processed without permission from the owner.

Merchants then use a special point-of-sale (POS) terminal equipped with cameras and facial recognition software. This scans customers’ faces and palms.

The machine compares these scans to the biometric template stored in the app. If it’s a match, the payment is authorised and charged to the corresponding PeasyPay account.

What about facial recognition bias?

The issue of facial recognition accuracy is one which is often cited, but rarely explained. Roger Grimes, an ex-Microsoft security architect, spoke to FinTech Futures on the topic back in February. He said facial biometric data changes too much to achieve commercial accuracy.

That’s because no vendor wants to deploy an authenticator which takes an arduous number of attempts to work. “To have less false negatives, you have to be more false positive,” Grimes said, explaining that to roll it out as a product, it has to be made less accurate.

But PeasyPay remains confident that it’s circumvented some of these drawbacks. It says its combination of face and palm scanning “solves the issue of mismatching a person”.

It acknowledges that “facial recognition systems’ accuracy degree can vary significantly depending on the person, software and situation”.

The technology also isn’t reliant on a proprietary infrastructure, rather being an open system which any bank or any merchant can join.