Living in a passive voice world 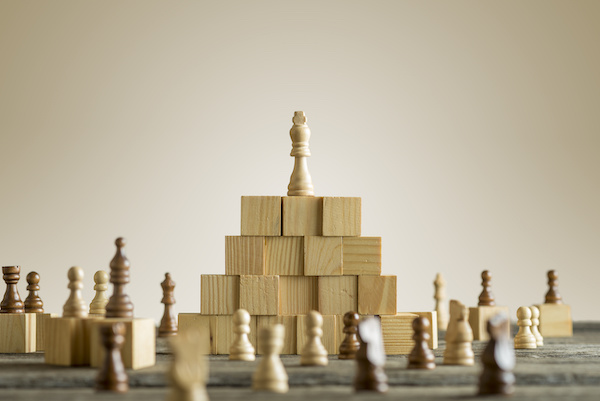 Speaking of higher forces, layers of authority above you, opaque dependencies. Deferred responsibility.

When vision, a hard and bold decision, impetus is required inside the bank, there is always another layer above, tying your hands. And isn’t that convenient?

Who are they, anyway?

Sure your boss, and the exec and the CEO and the board.

Who are these higher forces that hold sway?

Who are “they” anyway

And without giving too much away, the only thing above her was the sky.

I had an idea.

Potentially hare brained, we will never know, and I wanted her support.

She loved my idea. But. She wasn’t sure “they” would approve it. I didn’t know whether to laugh or cry. Because by that point it was not the first time I was hearing it. Far from it.

I had had the head of a division (7,000 souls in his care) tell me he had no resources to do a piece of work that needed, oh I don’t know, two engineers.

I had the head of a business (3,000 folks and a P&L to put small countries to shame) ask me if I could take one of his people that he had to make redundant, because he had no way of saving the headcount. Me with my team of four at the time. And a budget he approved.

I have seen a C-level exec look helpless when an initiative succeeded, because rather than meeting success with support for the next phase, the passive voice kicked in, and everyone gathered around to discuss the options one would have had if another initiative had been chosen, in the past, in a different world, while time passed and value stayed on the table wondering what went wrong.

I had someone tell me our collective hands are tied by a policy put in place a few years back by that same someone as a placeholder while some work was being carried out. The work had been carried out. The policy was no longer needed. But it was there and what can you do?

Actually, a lot. There is a lot you can do. That’s not the issue. The issue is what you choose to do.

Banking is an industry where often doing something and getting it wrong was far more lethal than doing nothing and watching the world burn. Keeping your head above water but below the parapet was a skill and make no mistake. Socialising decisions, deferring them till the very last minute, passing them on to the next guy or, if they had to be made, making them in such a way that responsibility is shared if they go wrong. The scramble for praise a familiar dance, if things go well.

Industries and organisations have a hand in perpetuating behaviours by rewarding them through promotion or survival and thus ensuring repetition, ad infinitum.

Because once in position, habitual behaviours are hard to break.

Habits formed because they were associated with success and survival are even harder to change.

So here we are: a parable of leadership for the grammar nerds.

Operating in the passive voice, where the subject is the recipient of a verb’s action and the actor is a person or persons often unspecified and nebulous.

Living in a passive voice world of our own making, where doing and deciding and taking responsibility becomes a vague and nebulous arena where “other people” always have more sway than the person you are speaking to. Even if you go round all the named stakeholders everyone thinks hold sway in a perfect circle of benign impotence. The organisation emerging like a sentient being with agency, a grumpy disposition and a short attention span, holding everyone back by withholding their view while having the final say.

Hell may be other people, but the organisation is you

My frustration with organisations big and small “living in the passive voice” is not new. I stood against it when I was inside the banks and I stand against it outside. Not because it makes my life difficult. Perversely, once you work it out it makes your life easier. It is navigable. And although the places it takes you to are weirdly diverse, the process is not volatile. That is not nothing when you are trying to affect change.

Especially in this moment in time when decision-makers get together to take stock of what the last few months have done to the work we had committed to this year, the projects we had started, the financial projections we had made.

I am not in the meetings and yet I know how they go.

Looking at the commitments and financial aspirations of the pre-COVID world and trying to square the circle, talking as if the world hasn’t changed, collectively and silently agreeing that the mopping up, cleaning up and straightening out exercise is the only way to resume operations. Without a conversation about the great unknown ahead or the great elephant in the room screaming going back is neither a plan nor a strategy. We need a bold new vision. Who’s got one.

Because, of course, the passive voice world doesn’t operate that way.

So those who have the vision now need to socialise and diute, calibrate and, above all, find answers to unanswerable questions while going round the houses with people looking for a higher decision-making authority to keep their hands tied just a little bit longer.

Now. Don’t get me wrong.

I get the abject fear of delving into the unknown, taking the future of organizations that have prospered for hundreds of years into your hands, the livelihoods of thousands of people and the life savings of millions and making decisions that affect them all. That’s scary stuff.

But it’s the stuff you signed up for when you took the job.

Or should have been.

Because the organisation is not an abstract entity. It’s you and me. And that means that, at some point, we reach the top where the buck stops. Or the room where everyone you need to make the hard decisions sits around the table. And the way this has historically played out, quarter on quarter, entailed demuring and delaying and hedging and acting like the decisiveness is the domain of a suddenly absentee Leviathan in whose shadow the caretakers live in the passive voice of the smallest possible decisions for the longest possible time. Well, that is no longer viable.

Because we are coming out the other side blinking into a world that is familiar and yet different. And we don’t know how different. How much has changed and in what ways. But we know it has changed and is still changing and we also know that our ways of doing things, our tools and processes strained and creaked under the pressure of the change as it was happening.

So while taking stock of project priorities and reforecasting projections, don’t think for a second I don’t see you. All of you. Defaulting to type. Returning to habitual tropes. Meaning well. Dodging the question. Knowing that it has to be answered, in the active voice, but not stepping up to do the answering.

And here’s the rub.

This is the way careers were built in banking from New York to Delhi and from Singapore to Milan.

It is nobody’s fault and everyone’s problem.

That is the issue with the passive voice.

And it served institutions well and people better.

But it has not been fit for purpose in a digitising, rapidly transforming world. We see it. We lament it. We wallow in it. Our initiatives often drown in it.

And this crisis has simply exposed more of the same.

There is a saying.

If you ask someone for directions and they know where you are trying to get to, they will take you there. If they only tell you how to get there, it’s because they don’t actually know.

Why do I say that?

Because now is not the time for powerpoint and memos.

And yet that is what we are getting.

That is what banks are producing and consuming, seeking comfort in familiarity. Trying to restore the world to its passive voice placidity.

Even though we know this approach stopped working as the digital revolution started.

Even though we know that this way of deciding and committing and engaging left us awash in directions on direction, but not much further down the road to where we are trying to get to than when we started the merry go round of trying to decide without committing.

And the world is changing. With or without us.

Humanly predictable in seeking the comfort of the passive voice world of old. In a moment that brings little comfort and predictability and requires, if not certainty then clarity. If not conviction, then courage. To pick a direction, rather than debate the directions. To drive to decisions, collectively and in partnership, sure. But actively. And purposefully. Switching from passive to the active voice, my grammar nerds, where the subject acts upon its verb and does the doing.