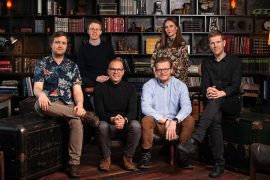 Indó is currently in the process of applying for a banking licence from the Icelandic Financial Supervisory Authority (FSA).

Founded in 2018, the bank’s six-person team has raised more than €1 million so far towards its goal of become Iceland’s first digital-only bank.

Indó claims that it will be the only bank in the country to offer “100% safe deposits” and completely backed by government-issued securities.

The challenger also claims that it will not be taking any fees on its accounts, only charging a transaction fee.

Skúlason spent two and half years as a director at VÍB, the asset management division of Islandsbanki.

Davidsson worked as a director at Barclays Capital for seven years before joining Islandsbanki as a managing director, a post he held for five years until June 2017.

Banking in Iceland emerged from the 2008 financial crisis with three of its largest banks taken over by the government.

Many of the country’s largest institutions were split apart and relaunched under supervision, including Landsbankinn, Islandsbanki, Arion Banko and MP Banki.