Global stocks dropped on Monday despite the Federal Reserve unleashing its most forceful effort to date to contain the financial fallout of the coronavirus, including a pledge to buy US government bonds in unlimited amounts, according to the Financial Times.

The US S&P 500 fell more than 3% in late-morning trading, alongside a similar decline in the Dow Jones Industrial Average. US Treasuries whipped around but by late morning the Fed’s promised buying spree appeared to be having an effect in pushing borrowing costs down. 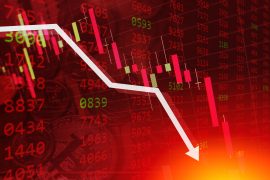 A further wave of dividend suspensions and cancellation of buybacks were announced.

The yield on the benchmark 10-year note, which moves inversely to price, was roughly 13 basis points lower at 0.71%. The central bank’s historic decision to buy corporate debt also helped to buoy the price of one investment grade bond exchange traded fund, LQD.

European equities bounced from lows on the Fed’s new intervention, but not enough to crawl out of the red. The Stoxx 600 was roughly 4% lower as was the UK’s FTSE 100.

Read more: SoftBank to sell $41bn in assets to firm up financials amid virus outbreak

“Fundamentally what the market is looking for is a very solid fiscal response,” says Anik Sen, global head of equities for PineBridge Investments. “If the main issue is businesses shutting down, then monetary policy from the Fed has limited efficacy.”

Investors had been waiting for more measures to support markets after their hopes for a $2tn package to support the US economy during the outbreak were dashed on Sunday when senators failed to immediately advance the necessary legislation.

Other traders and investors agreed the delay to the stimulus package had echoes of September 2008, when Congress voted down the bailout package known as Tarp, sparking fresh turmoil in markets before it was passed at the second attempt.

The latest Fed intervention followed a steady stream of bleak news reports over the weekend, showing the outbreak worsening in Europe and a second wave spreading in Asia.

Elsewhere in Asia, China’s CSI 300 index dropped 3.4% and Hong Kong’s Hang Seng fell 4.9%. In Japan the Topix index gained 0.7 per cent after the country returned from a three-day weekend. Traders said dealing floors now assumed that the central bank would intervene heavily at any sign of market capitulation.

See also: Bank of England dips into US repo to lend banks $15bn

“The ‘corona crisis’ has pushed the world economy into a deep recession,” says Jan Hatzius, chief US economist at Goldman Sachs, in a note to clients on Sunday. He says the crisis — and governments’ response to it — represents a “constraint on economic activity that is unprecedented in post-war history”.

In Italy, the centre of the outbreak in Europe, the government has ordered all businesses except those deemed essential to close down, as the death toll there climbed above 4,000 people. The total number of global cases has surpassed 350,000, including more than 15,000 fatalities (at the time of writing). Over 100,000 patients are reported to have recovered.

The virus’ rapid spread has left investors desperate to quantify its economic impact. Investors are braced for savage cuts in dividends across the FTSE 350 as companies hoard cash to see them through the coronavirus crisis.

On Monday, a further wave of dividend suspensions and cancellation of buybacks were announced by companies scrambling to assess the hit to their earnings from the pandemic, the FT reported.

More than a dozen companies have already cut or suspended payouts in the UK. Investors are worried that dividend cover from earnings has become overly optimistic given an unprecedented drop in consumer demand across industries, and the knock-on effect on areas such as manufacturing and supply chains.

As well as cutting dividends, companies could also find themselves unable to pay a final dividend if they were forced to delay or suspend their annual meetings.